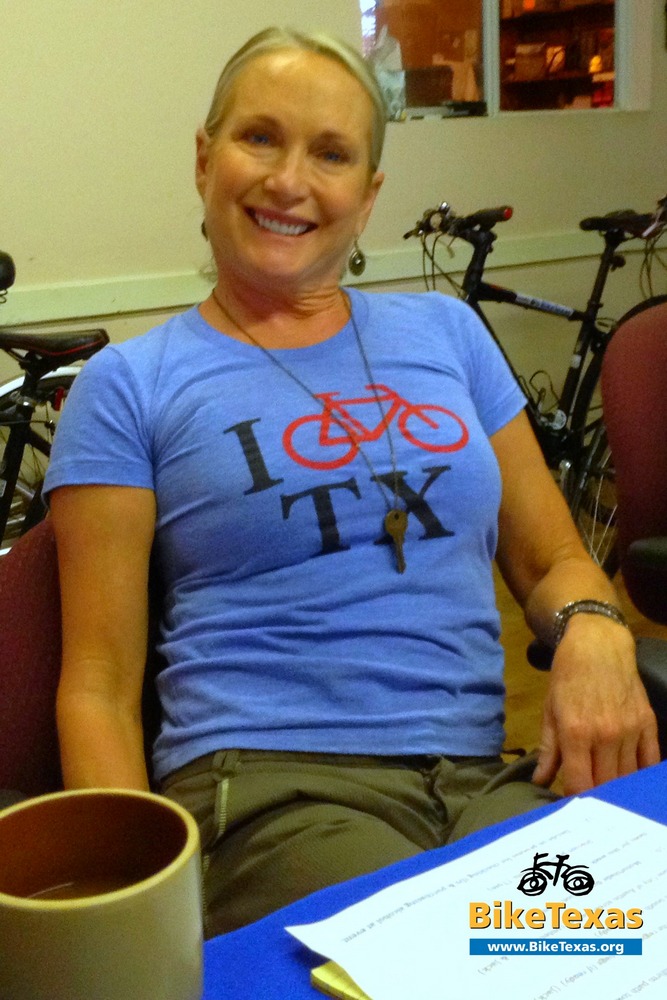 Want the latest news in your inbox? Sign up for BikeTexas emails here.

Time is Running Out! Order Now to get Your BikeTexas Gift Before December 24

Order by noon on Friday, December 19

Get your t-shirts, jerseys, license plates, and more, but you’ll have to hurry! Order by 12:00 PM TOMORROW, December 19, to make sure your gift arrives before December 24.

Already have your shopping done but still want to find a way to support bicycle advocacy this holiday season? Great! The second half of our gift guide is just for you: check out Amazon Smile, Goodsearch, and our special partnership with Freytag’s Florist.

Thanks for making Texas a great place to bike, walk, AND have a happy holiday season!

You Did It! Bike/Ped Safety Measure Included in Cromnibus

Congress passed the 2015 budget bill (Cromnibus) over the weekend, which includes a safety performance measure for bicycles and pedestrians– a measure that people who ride bikes have been asking for during 2014. Your voice has made a difference– thank you!

We’d like to thank Texas’ Rep. Michael McCaul, who at BikeTexas’ request was one of the original bill sponsors for safety performance measures. Rep. McCaul’s support for government accountability for all forms of transportation sends a clear signal that he is listening to his constituents, and we’re proud to have partnered with the League of American Bicyclists on this effort.

The stars in Texas keep getting brighter for people who ride bikes: three Texas cities were added to the League of American Bicyclists’ Bicycle Friendly Communities list this week!Congratulations to our three new Honorable Mention cities:

Want to see your city on the list in the next round in Spring 2015? We can help! Contact advocacy@biketexas.org to get started.

BikeTexas is sad to announce that the BikeTexas KidsKup will no longer be a feature at TMBRA events beginning in the spring of 2015.

We’ve enjoyed 16 years of a delightful and productive partnership between TMBRA and BikeTexas KidsKup that has produced many Texas mountain bikers. KidsKup will continue at other venues throughout the year, so stay tuned for news of when there will be a KidsKup event near you!

Chelsea Norman of Houston was killed in a hit-and-run collision last December. Last week, Margaret Mayer was found guilty of failure to stop and render aid and was sentenced to 15 years in prison. BikeHouston organized a support ride the night before the trial began. And catch the local transportation reporter’s take on the outcome.

Every month, people from around Texas who ride bikes come to Austin to tell the TTC why we need TAP funds in Texas. Every month, we’re there to support these speakers & let the TTC know we’re not going away– and today is no exception.

Join BikeTexas today so we can continue to fight for you. 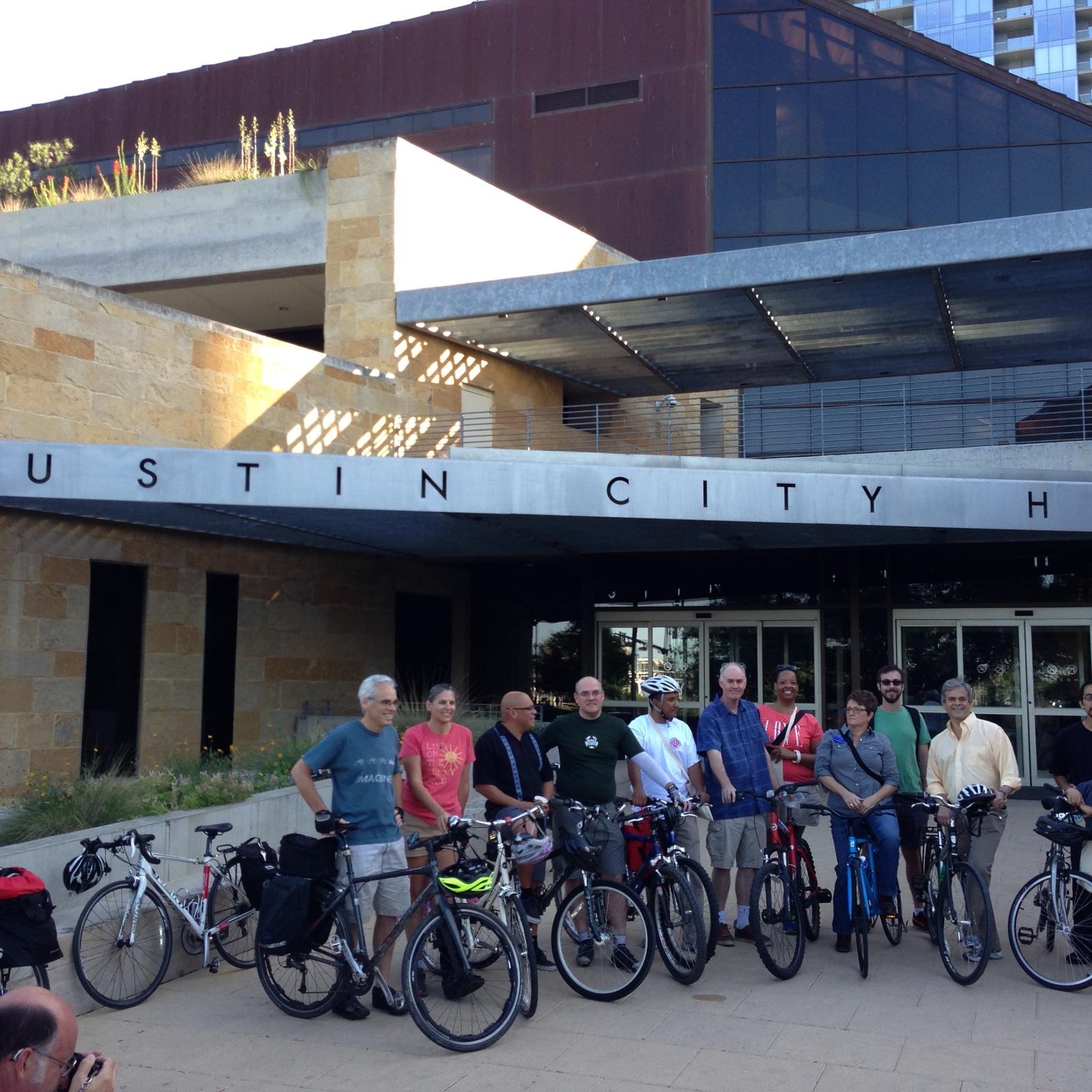 The campaigning is done, the votes are counted, and Austin’s new 10-1 City Council is ready to take their seats in January. BikeTexas congratulates all the new council members on their successful run for office. We are very excited that many pro-bike candidates are now on the council, including those we endorsed in districts 2, 3, 4, 5, and 7. 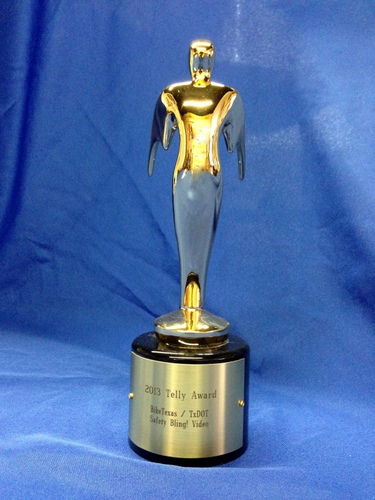 Well, sort of. We’d like to thank a whole bunch of people, starting with the folks at the 34th Annual Telly Awards, who gave BikeTexas and TxDOT a 2013 Bronze Telly for our Safety Bling! video. (We wanted to share this news sooner, but it turns out it takes a while for a shiny trophy to arrive!)

Safety Bling! was filmed as part of CATS in 2012 at Texas A&M campus in College Station and Pfluger Bridge in Austin.

Throwback Thursday: Once Upon a December

Bicycle advocacy doesn’t take a holiday, as proved by all the things Decembers past have brought to BikeTexas. Make sure your eggnog fits into your bicycle drink cage and roll along with us through this look back!

BikeTexas takes part in Fundraising Friday, a fun way for nonprofits to raise money on Fridays– people give to their favorite nonprofit on Friday, then talk about it on social media using the #FundraisingFriday hashtag. For the rest of 2014, we’re stepping up our #FundraisingFriday game. Every Friday in December, donate or join BikeTexas at any membership level and we’ll send you a free gift. We have a bin full of goodies to share, and we want it to be empty on December 31!

Give Thanks: BikeTexas Staff at Thanksgiving

MISSION BikeTexas advances bicycle access, safety, and education. We encourage and promote bicycling, increased safety, and improved conditions. We unite and inspire people and provide a cohesive voice for people who ride bikes in … END_OF_DOCUMENT_TOKEN_TO_BE_REPLACED