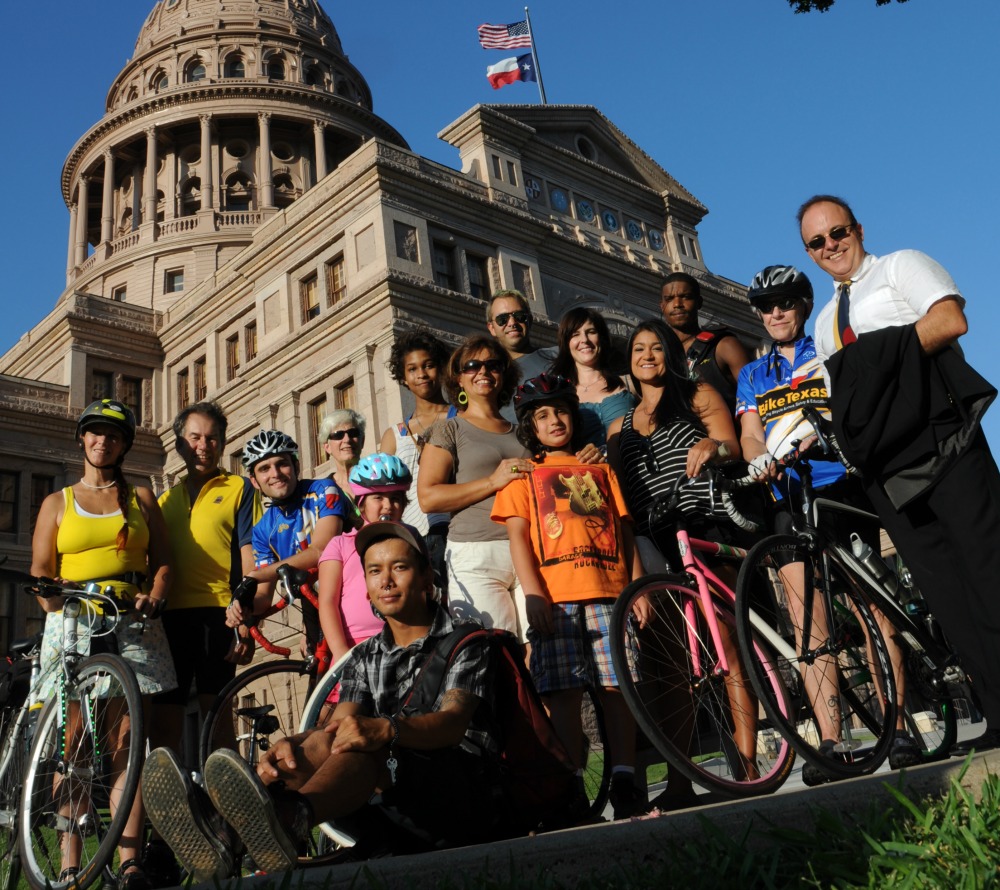 These “rules of the road” are based on Texas Transportation Code statutes (aka: Texas bicycle laws). Find the complete bicycle code at the bottom of the page. Laws are designed to improve the safety of everyone who uses the roadways. Don’t become a statistic! Remember to always use hand signals and body actions to communicate with motorists and other bicyclists.

1. Bicyclists have the rights and duties of other vehicle operators: (551.101)

Yes, this means you have to stop at stop signs and red lights, but cars are required to yield right-of-way to a bicycle when appropriate, just as to any other vehicle.

Near the curb is subjective (we recommend leaving a cushion of about three feet) but the law gives a cyclist the right to take the lane when necessary for safety.

One when signaling but two when turning works well.

Point the way you are going, let the other operators know what you want to do.

Don’t let your friends share your bike while riding unless you’re both on a tandem.

Racing and taking the lane are special cases.

The light is primarily so people can see you coming from the side, where their headlights do not shine on your reflectors. The law, effective as of Sept. 2001, states that a red light can replace a red reflector.

Don’t test that front brake to see if the wheel will skid while riding, especially down hill.

An operator who is permitted to give a hand and arm signal shall give the signal from the left side of the vehicle as follows:

to make a right turn signal, extend hand and arm upward, except that a bicycle operator may signal from the right side of the vehicle with the hand and arm extended horizontally; and

to stop or decrease speed, extend hand and arm downward.

SUBCHAPTER A. APPLICATION OF CHAPTER

This chapter applies only to a person operating a bicycle on:

a path set aside for the exclusive operation of bicycles.

A provision of this subtitle applicable to a bicycle also applies to a moped, other than a provision that by its nature cannot apply to a moped.

SUBCHAPTER B. REGULATION OF OPERATION

(a) A person operating a bicycle has the rights and duties applicable to a driver operating a vehicle under this subtitle, unless:

a provision of this chapter alters a right or duty; or

a right or duty applicable to a driver operating a vehicle cannot by its nature apply to a person operating a bicycle.

(b) A parent of a child or a guardian of a ward may not knowingly permit the child or ward to violate this subtitle.

(a) A person operating a bicycle shall ride only on or astride a permanent and regular seat attached to the bicycle.

(b) A person may not use a bicycle to carry more persons than the bicycle is designed or equipped to carry.

(c) A person operating a bicycle may not use the bicycle to carry an object that prevents the person from operating the bicycle with at least one hand on the handlebars of the bicycle.

(a) Except as provided by Subsection (b), a person operating a bicycle on a roadway who is moving slower than the other traffic on the roadway shall ride as near as practicable to the right curb or edge of the roadway, unless:

(1) the person is passing another vehicle moving in the same direction;

(2) the person is preparing to turn left at an intersection or onto a private road or driveway;

(3) a condition on or of the roadway, including a fixed or moving object, parked or moving vehicle, pedestrian, animal, or surface hazard prevents the person from safely riding next to the right curb or edge of the roadway; or

(4) the person is operating a bicycle in an outside lane that is:

(A) less than 14 feet in width and does not have a designated bicycle lane adjacent to that lane; or

(B) too narrow for a bicycle and a motor vehicle to safely travel side by side.

(b) A person operating a bicycle on a one-way roadway with two or more marked traffic lanes may ride as near as practicable to the left curb or edge of the roadway.

(a) A person may not operate a bicycle unless the bicycle is equipped with a brake capable of making a braked wheel skid on dry, level, clean pavement.

(b) A person may not operate a bicycle at nighttime unless the bicycle is equipped with:

(A) A red reflector that is:

(i) of a type approved by the department; and

(ii) visible when directly in front of lawful upper beams of motor vehicle headlamps from all distances from 50 to 300 feet to the rear of the bicycle; or

(B) lamp that emits a red light visible from a distance of 500 feet to the rear of the bicycle.

(a) In this section, “bicycle” means a non-motorized vehicle propelled by human power.

(b) A sponsoring organization may hold a competitive bicycle race on a public road only with the approval of the appropriate local law enforcement agencies.

(c) The local law enforcement agencies and the sponsoring organization may agree on safety regulations governing the movement of bicycles during a competitive race or during training for a competitive race, including the permission for bicycle operators to ride abreast.

MISSION BikeTexas advances bicycle access, safety, and education. We encourage and promote bicycling, increased safety, and improved conditions. We unite and inspire people and provide a cohesive voice for people who ride bikes in … END_OF_DOCUMENT_TOKEN_TO_BE_REPLACED