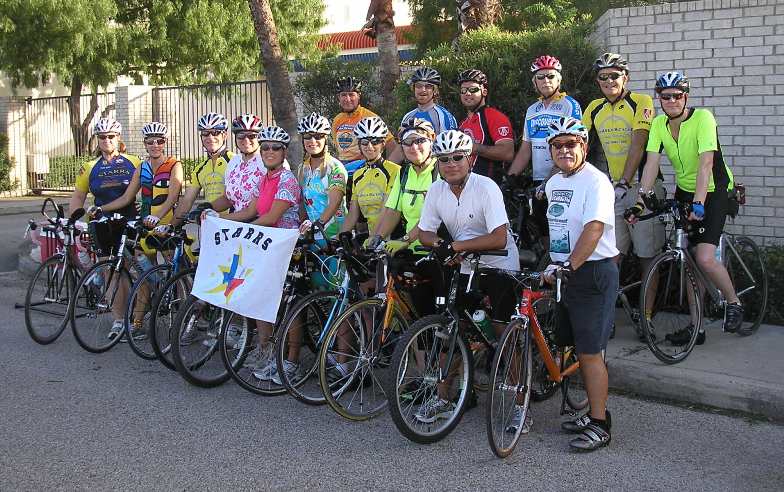 On July 10 and 11, 2010, Bay Area Bicycles of Corpus Christi sponsored the first League of American Bicyclists event in their city. Preston Tyree, the Director of Education for the League, led the group of seventeen in Traffic Skills 101, the first step cyclists must take to become a League Certified Instructor (LCI).

The question came up as to why sponsor this major task? Because cycling in Corpus Christi is growing. At the present moment there is no structured cycling education for experienced or beginner cyclists, we must change and show the city that we are improving our skills. By the end of 2011 the goal is to have close to 20 LCIs and over 100 people attend Traffic Skills 101 in Corpus Christi.

The seventeen attendees participated in four hours of classroom work and over four hours of cycling skills on their bicycles. Participants learned that performing a “track stand” at a red light is unsafe, as most motorists are unsure of your actions. It is best to place a foot on the ground so a motorist understands that you are stopping at the red light. The most important point that was absorbed by the cyclist was “be predictable.” Preston stated: “Car drivers believe that a cyclist is an alien from outer space with the spandex shorts, colorful top, and some funky helmet on their head.” He emphasized to always scan, look at them with both eyes, and show them your face. You are a human being just like them. All the participants who attended Corpus Christi’s first Traffic Skills 101 course instructed by the League of American Bicyclists said it was very educational and beneficial to their cycling knowledge.

This group will be attending the LCI course in the fall so they can be the future safe cycling leaders of tomorrow in Corpus Christi.

BikeTexas note: Thank you, Tom Neagli, Owner of Bay Area Bicycles in Corpus Christi, Texas for getting your cycling community on a safer path.

MISSION BikeTexas advances bicycle access, safety, and education. We encourage and promote bicycling, increased safety, and improved conditions. We unite and inspire people and provide a cohesive voice for people who ride bikes in … END_OF_DOCUMENT_TOKEN_TO_BE_REPLACED