You are here: Home / BikeTexas BikeNews / BikeNews; Community / Ride of Silence in Austin 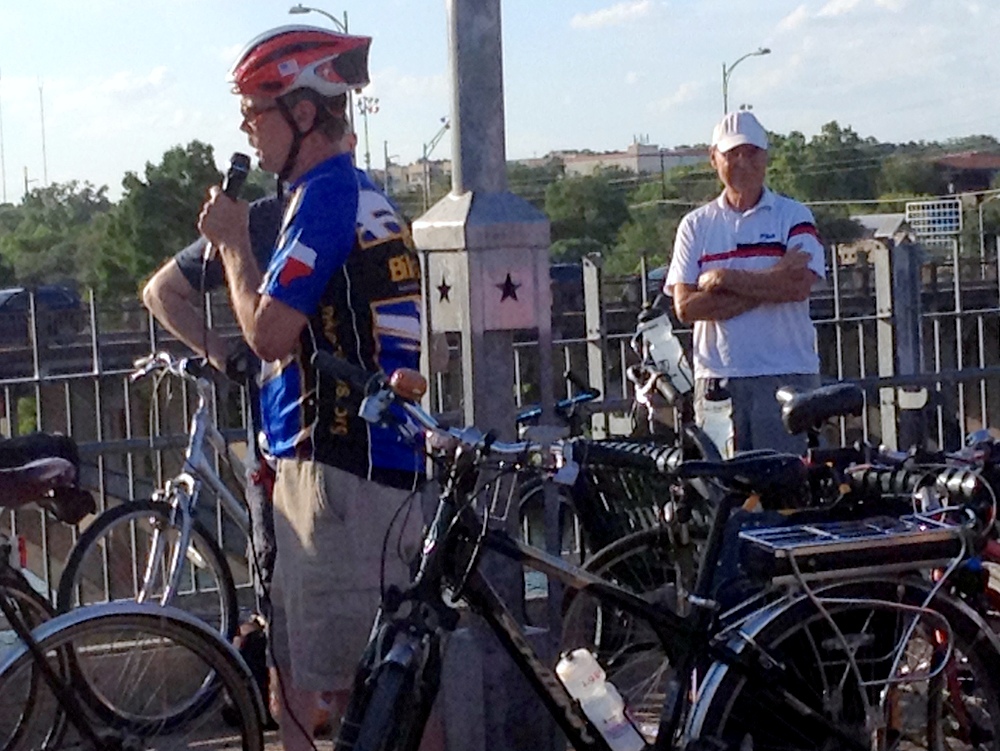 On May 21, about 40 people on bikes gathered on the Pfluger Bridge in Austin for the local Ride of Silence.

BikeTexas Executive Director Robin Stallings began the proceedings at 6:30 by welcoming all riders and thanking them for coming. He reminded those gathered, “The Ride of Silence began in 2003 when Larry Schwartz was killed in Dallas and his friend Chris Phelen organized the ride for local cyclists. Since then, it’s grown to over 300 rides all over the world, all setting off at 7 PM.” Robin then welcomed those who were present in honor of John Fusselman, who had been killed while riding in Austin the previous weekend. Robin mentioned that he was riding that evening in honor of many, including former BikeTexas board member Iris Stagner, before offering the microphone to anyone who wished to speak.

The first gentleman to speak (our apologies for not catching everyone’s name) said he was riding in honor of Joe Holan, who was killed last fall on a similar route that this gentleman uses. He also mentioned John Fusselman. 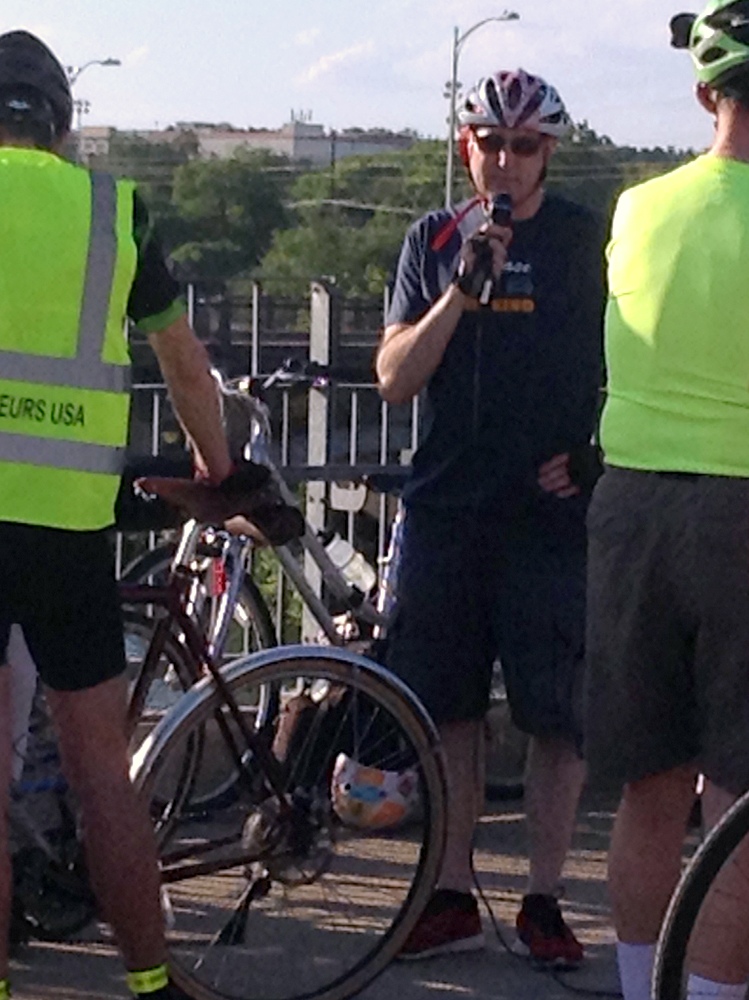 John Fusselman Jr. then took the microphone to thank everyone for coming and spoke for a few minutes about his father’s love of riding his bike. He especially thanked his father’s friends who had come out to the ride in Mr. Fusselman Sr.’s honor.

Preston Tyree spoke of his friendship with John Fusselman and their habit of regularly going together to give blood. He also told the crowd that Mr. Fusselman was an organ donor, so through his family’s tragedy other families had new hope for their loved ones.

Al Bastidas spoke next, saying that this ride means a lot to him and to many others. He encouraged the crowd to remember the friends we’ve lost and be thankful for those we still have.

Durwood Mayfield took the microphone and said he was riding in honor of Paul Nichols, who was killed near Littlefield a few years ago by a distracted driver.

Nita Kostroski-Durant, who was instrumental in starting the Ride of Silence in Austin in 2006, said she was riding in honor of Gary Glickman and a man who had been hit by a car nearby only minutes before the ride participants gathered. She reminded participants to always be vigilant while riding.

Harvey Davis spoke next, telling fellow riders that he never misses a Ride of Silence, and he rides in honor of all cyclists lost, including his son who died September 28, 2008.

Katie Anderson said she rode in honor of Cody Johnson, who was killed in 2012, and Al Bastidas who was hit by a car and survived.

Another friend of John Fusselman took the microphone and shared with the group that he was supposed to be riding with John on the morning he was killed. In addition to riding in John’s memory, this gentleman was also riding in honor of Stan Oldaf, a dentist from New York who gave away free dental care, and Ben Engilis, also from New York, who died in 2007.

Finally, a gentleman who was riding with his young son took the microphone and said he was riding in memory of Joe Holan, whose daily commute was fueled by his love for his family (his wife and four children) as well as his passion for cycling.

Before the group set out for the silent ride, Robin Stallings read the Ride of Silence poem: 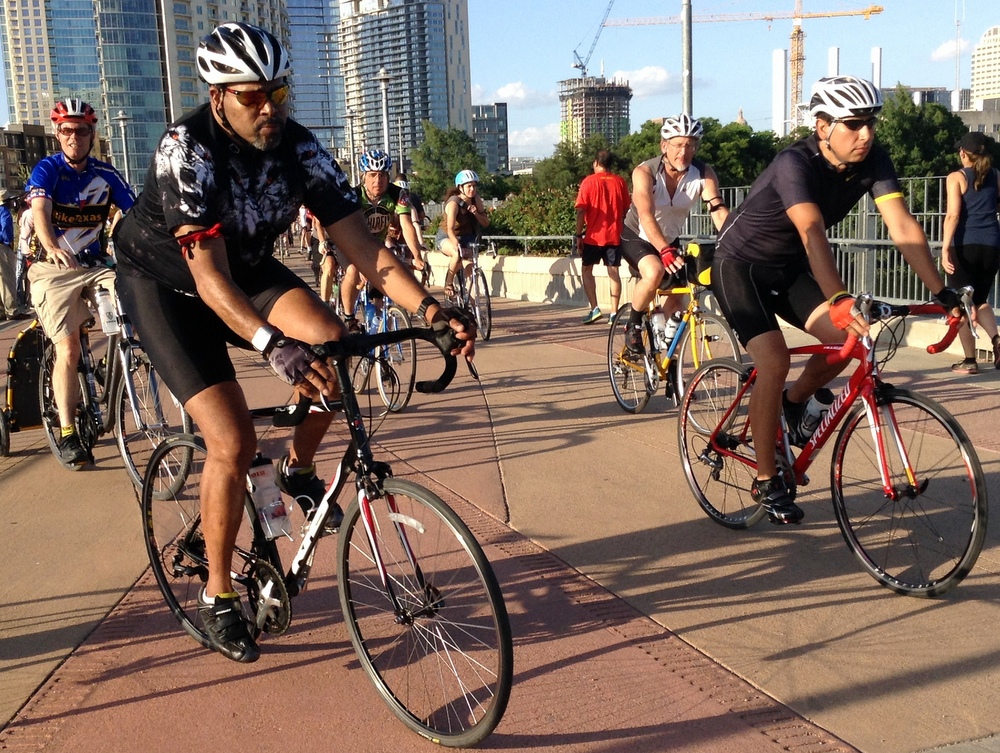 Tonight we number many but ride as one
In honor of those not with us, friends, mothers, fathers, sisters, sons
With helmets on tight and heads down low,
We ride in silence, cautious and slow
The wheels start spinning in the lead pack
But tonight we ride and no one attacks
The dark sunglasses cover our tears
Remembering those we held so dear
Tonight’s ride is to make others aware
The road is there for all to share
To those not with us or by our side,
May God be your partner on your final ride

MISSION BikeTexas advances bicycle access, safety, and education. We encourage and promote bicycling, increased safety, and improved conditions. We unite and inspire people and provide a cohesive voice for people who ride bikes in … END_OF_DOCUMENT_TOKEN_TO_BE_REPLACED