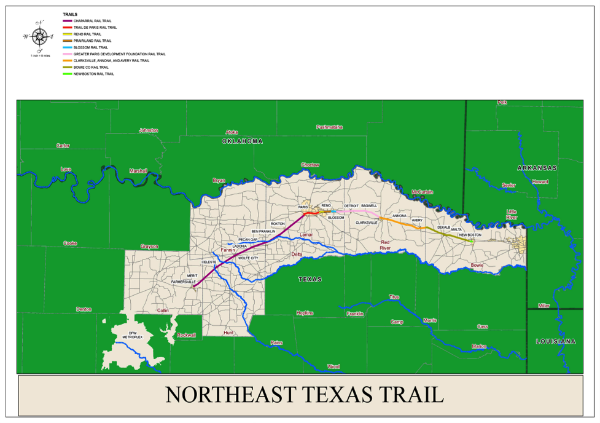 Northeast Texas Trail: A Diamond in the Rough

Northeast Texas Trails Coalition (NETT) brings together the seven organizations that between them hold the stewardship of the 130-mile Northeast Texas Trail that runs through seven Texas cities. The trail stretches from Farmersville through Paris and Clarksville and ends in New Boston. Long-range plans call for DFW’s Trinity Trail Network to one day connect to NETT at Farmersville. People who ride bikes from all around the DFW area support the NETT.

Although the rail lines disappeared from the corridor 20 years ago, trail improvements have been slow. The longest existing portion of the trail is a nine-mile trek from Paris to Blossom and Reno. Current portions of the trail are funded by Recreational Trails funds, Transportation Alternatives Program grants, and donations of material, equipment, and labor from cities, counties, and folks in the area who are committed to their trail. NETT estimates about $33 million is needed to complete the full 130-mile trail.

On January 30, NETT members voted to explore making the trail into a linear state park, similar to the Lake Mineral Wells Trailway west of Fort Worth and the Caprock Canyon Trailway near Quitaque in West Texas.

Getting Together with Texans for State Parks

Texans for State Parks (TSP) is the umbrella organization for the numerous “Friends” groups that serve many of the state parks in Texas. Friends of state parks perform a range of duties at their own adopted parks, such as staffing visitor centers, conducting tours and education sessions, assisting visitors, and maintaining equipment and facilities, as well as building and maintaining bridges, signage, and other trail features in the parks. TSP also works closely with state and local officials on behalf of the parks system.

BikeTexas staffer Mark Stine holds membership in both NETT and TSP and worked with the leadership of both to arrange for NETT representatives to attend TSP’s annual meeting, March 25-26. NETT President Earl Erickson and Chaparral Rails-to-Trails, Inc. Treasurer Bub Mudie presented information about the NETT and were able to visit with TSP and Texas Parks and Wildlife (TPWD) members at the annual meeting, forming strong new partnerships to further this vision of NETT one day being a state park. 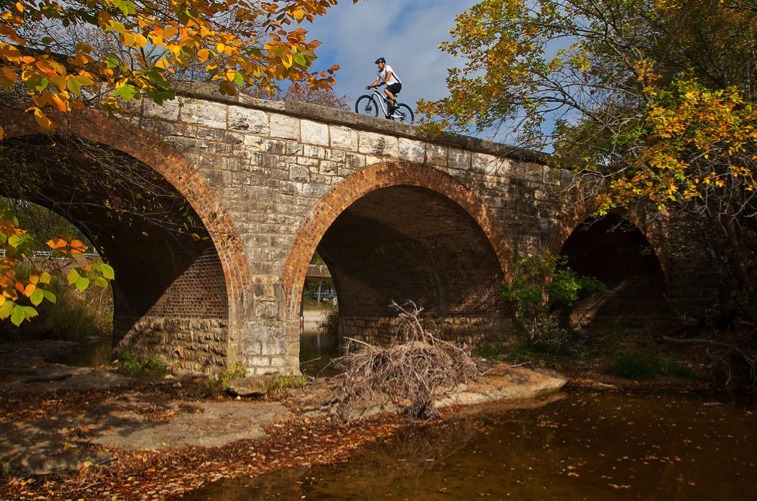 Birth of a State Park

The process for a property to become a state park is a long one. NETT has two big advantages. First, the land for the right-of-way has already been acquired and is in the possession of the seven organizations that make up the NETT coalition. Second, the communities along the length of the trail have thrown tremendous support behind its completion. City and county officials in the region mirror this support.

Sometimes state parks come into being in segments, and this may ultimately be the case for the NETT. Check out this article from TPWD’s Rob McCorkle about how a state park is born: “Birth of a Park: First You Acquire Some Iconic Texas Land. Then What?”

Many people are already hiking and biking on the NETT, even the unimproved sections. Read these articles from TWPD and TxDOT for an on-the-ground view of the trail:

“Lone Star Walkabout:  A hiker sets off to be the first one to walk the 130-mile Northeast Texas Trail“

“Northeast Explorer: Hike and bike a new rail trail from the Blackland Prairie to the Piney Woods“

Next steps? A feasibility study is typically the first step toward a new state park. Meanwhile, NETT President Earl Erickson has invited Brent Leisure, TPWD’s Director of Texas State Parks, to join him for a bike ride on the existing NETT trail segments.

MISSION BikeTexas advances bicycle access, safety, and education. We encourage and promote bicycling, increased safety, and improved conditions. We unite and inspire people and provide a cohesive voice for people who ride bikes in … END_OF_DOCUMENT_TOKEN_TO_BE_REPLACED