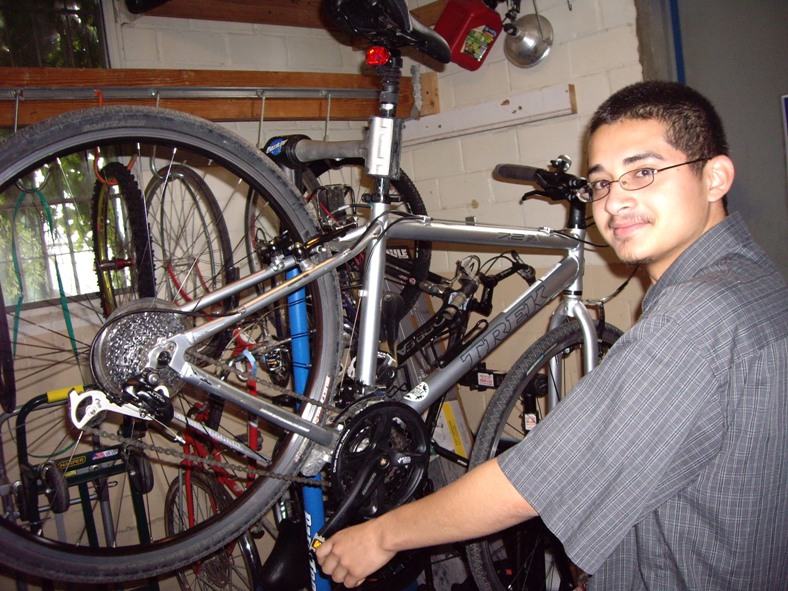 My name is Zacharias Ontiveros, I am 16 years old, and I attend Austin High School. I have been riding a bicycle since I was nine and I love to get around by bike. I live in a neighborhood in east Austin and I ride my bike every weekend, taking trips to Lady Bird Lake and back to my house.

Let me tell you a story about how riding a bike changed my life. A few years ago, I left my house to ride the trail at about 8:30 p.m. and rode until about 10:30 or so. About three blocks away from home, I pulled up to a stop sign and waited for a car to pass. A police car pulled up with his lights on, and little did I know he was there for me – I was surprised when he said he had pulled me over because I had no lights on my bike, only reflectors.

He issued me a ticket and I was on my way. With that ticket I ended up on probation for eight months. I successfully completed probation, and when I was about to get off, my probation officer mentioned a program through Travis County that could get me a summer job, so I signed up. That first summer I ended up at a recreation center watching kids. I signed up for the program again the next summer and I ended up at a place called BikeTexas.

It was more than I expected. I learned how to use signs if you make turns. I was educated on the history of bikes and how laws on bikes came to Austin. I completed the program that summer, and when I signed up for this summer I asked to go back to BikeTexas. The last time I was here I learned a lot, and I knew I was going to learn something new again.

Sure enough I did, and this time I learned to tune up bikes and learned more about the tools you use to fix and build bikes with. With that knowledge I went home and fixed parts on my bike that I learned were easy to fix. While I was fixing my bike in my backyard my friend came over and noticed I was fixing my bike, so he asked me if I could help him with his bike. I said yes and he brought his bike over and the first thing I noticed was that he didn’t have any lights so I told him he needs them because it’s the law! So I fixed his bike and he was so thankful he gave me $20.

I thought I could probably help others by letting them know more about safety rules and laws about bikes, and possibly fix bikes too. So now when my friends need help on their bikes and help on parts that need fixing I am more than happy to help them, and it’s all getting better because they’re starting to spread the word and bring their friends.

MISSION BikeTexas advances bicycle access, safety, and education. We encourage and promote bicycling, increased safety, and improved conditions. We unite and inspire people and provide a cohesive voice for people who ride bikes in … END_OF_DOCUMENT_TOKEN_TO_BE_REPLACED