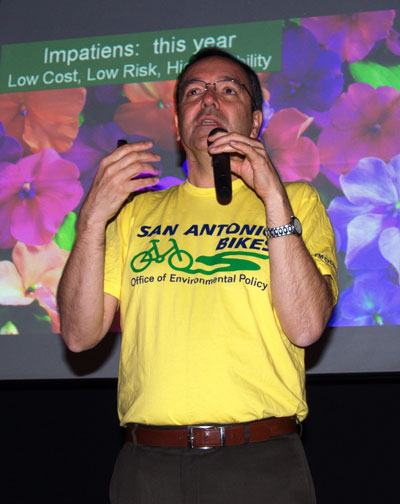 On a freezing cold night Wednesday February 2, 2011, Gil Peñalosa delivered an impassioned and rousing presentation to a crowd of about 75 at the Jump Start Theatre in the Blue Star arts complex, as the first event in the 2011 Shifting Gears Lecture Series.

Mr. Peñalosa spoke about the need for building cities that allow mobility by people of all ages, in order to create vibrant, healthy, and economically sustainable communities while reducing congestion. He spoke of the need for complete streets and in particular separated facilities such as cycletracks, showing examples from cities around the world where small children and the elderly felt safe and comfortable navigating busy cities by bike and on foot.

Mr. Peñalosa also spoke about Ciclovias, a term he coined while Commissioner of Parks in Bogota, and the many cities that have started regular pedestrian sundays that bring out hundreds of thousands of people for fun physical activity in a family-friendly environment. “If you look at a city from the sky, you see that the streets are the largest area of public space,” he said. “How do we want to use them?”

The audience was mixed: several city staff were in attendance from the Office of Environmental Policy and Department of Health, Department of Transportation, and the Parks Department; members of local bike clubs San Antonio Wheelmen and River City Bent Riders; members of the advocacy group Bexar Trails; folks from Bike World; and several high school students from the International School of the Americas.

Mr. Peñalosa will speak to legislators and staff Thursday, Feb. 3 at the state Capitol building during a policy luncheon, and again to the public at an evening event in downtown Austin. To register for the evening event, go to http://www.BikeTexas.org/ShiftingGears

MISSION BikeTexas advances bicycle access, safety, and education. We encourage and promote bicycling, increased safety, and improved conditions. We unite and inspire people and provide a cohesive voice for people who ride bikes in … END_OF_DOCUMENT_TOKEN_TO_BE_REPLACED