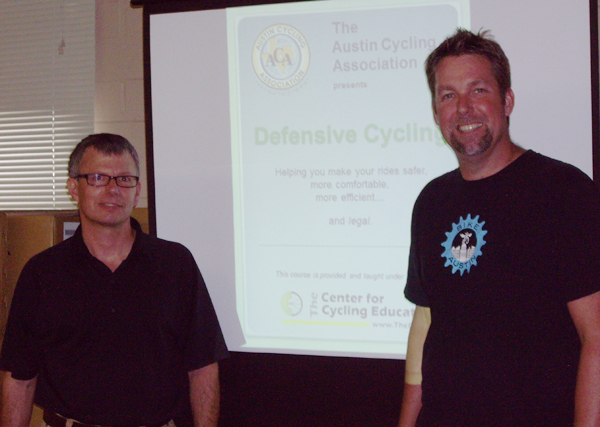 Wednesday July 7, 2010 saw the debut of the first-ever Defensive Cycling class in Texas. Seven cyclists who had recently been ticketed participated in the class, hoping avoid fines and learn safe cycling skills. Allan Dunlop, with the Center for Cycling Education, and hired by the Austin Cycling Association who administers the course, led the group through a series of lessons on how to cycle safely, effectively, and within the law.

Most of the cyclists at the class agreed, “they wouldn’t have come to the course if they had not gotten a ticket,” says Dunlop. However, what they got out of the class was much more than just avoiding the fine. For many participants, it was the first time they had consciously evaluated their bike riding habits. Even before coming to the class, says Dunlop, they were curious about how Defensive Cycling could improve their safety and effectiveness at cycling. “It got them thinking, maybe this can be of benefit to me, maybe I can make some changes.”

Dunlop developed the curriculum for the classes to follow the essential aspects of a Defensive Driving course, adapted for cyclists with help from Austin Cycling Association’s Education Committee.

The class is sanctioned by the City of Austin Municipal Court, who have honored the benefit of bicycle education over simply paying a fine.

Dunlop sees the classes as having a reach well beyond those taking the course. “There’s a general feeling [among cyclists] that there is no purpose to getting a ticket.” But, says Dunlop, knowing the process of what happens when you get a ticket, that taking the time to learn about safe cycling skills and traffic laws will help dismiss a ticket, that will encourage them to ride better, even before they get caught violating the rules of the road.

Wes Robinson, ACA’s Education Director, agrees wholeheartedly. He writes in the latest ACA newsletter, “With no formal bicycle education program in the U.S., the general population’s knowledge of how to bicycle safely and responsibly in traffic could stand some fine-tuning. With an incentive like ticket dismissal, I am very hopeful that Defensive Cycling will allow us to educate many cyclists that we otherwise would not have had an opportunity to reach.”

The City of Austin’s 2009 Bicycle Master Plan mandated the formation of a bicycle traffic fine diversion class such as ACA’s Defensive Cycling, but the institutionalization of the course has been a long time coming. Annick Beaudet, Austin’s Bicycle Program Manager, helped start a similar class on UT campus in the 1990’s. In 2005, the city’s Street Smarts Task force recommended such a course in their final report. This past year Dunlop and ACA have developed the curriculum, and finally cyclists can take advantage of a regularly offered course.

From now on, BikeTexas headquarters will host ACA’s Defensive Cycling classes twice a month, on the first Wednesday evening and the first Saturday morning. Each class costs $25 for participants, who must register in advance. For more information see www.austincycling.org

MISSION BikeTexas advances bicycle access, safety, and education. We encourage and promote bicycling, increased safety, and improved conditions. We unite and inspire people and provide a cohesive voice for people who ride bikes in … END_OF_DOCUMENT_TOKEN_TO_BE_REPLACED