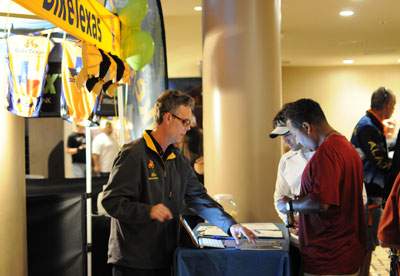 Thousands of people dedicated to eradicating Multiple Sclerosis converged at the Omni Hotel in Houston, Tx on Friday, April 20, 2012, in preparation for a grueling two-day ride to Austin.

BikeTexas has been supporting the ride since our inception in 1991. It was a great chance to connect with old friends and members of BikeTexas, individuals as well as bike shops and clubs.

It continues to impress us here at BikeTexas that non-bike riders have such a committment to the cause that they will endure great effort (and a fair amount of saddle pain) to beat the scourge of MS.

Yet even as they dedicate so much time and effort to raising money, more and more we hear from ride participants that they are having trouble feeling safe on the roads when they’re out training. We saw overwhelming support for a state-wide Complete Streets law, and were able to collect hundreds of signatures for our petition.

Many thanks to all the organizers, volunteers, riders, and donors that make the BP MS150 such a world-class and humble event.

MISSION BikeTexas advances bicycle access, safety, and education. We encourage and promote bicycling, increased safety, and improved conditions. We unite and inspire people and provide a cohesive voice for people who ride bikes in … END_OF_DOCUMENT_TOKEN_TO_BE_REPLACED