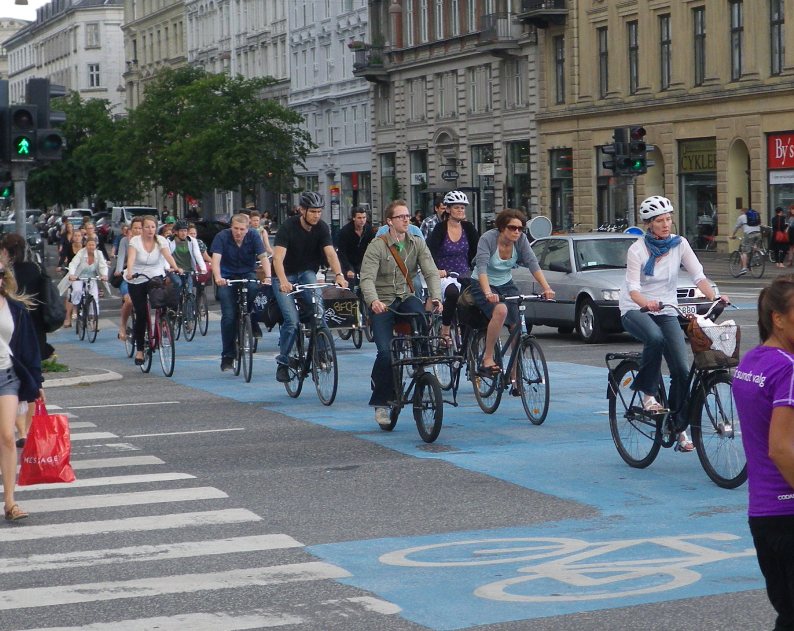 According to BikeTexas Executive Director Robin Stallings, the Velo-City global 2010 cycling conference in Copenhagen (CPH) June 22-25 was unforgettable. One thousand attendees from 60 countries learned that “cycle tracks”, “separated bike lanes”, and “protected bikeways” are three ways to say “the future of bicycles as transportation” throughout the world.

Keynote speaker Janette Sadik-Khan, Commissioner of Transportation in New York City, gave an inspiring presentation about cycle tracks and other ongoing big changes to the public space in NYC for cyclists and pedestrians. New York Mayor Bloomberg has made a major commitment to remake the public space for people instead of cars and Sadik-Khan is approaching the task like General George Marshall approached the rebuilding of Europe after WWII.

Speaker Gil Penalosa shared a vision for cities where “eight year olds to eighty year olds could get around with freedom and independence”. As Director of Parks in Bogota, Columbia he implemented the policies of his brother, Enrique Penalosa, and built several hundred kilometers of protected bikeways in only three years.

CPH itself is at the top of the heap when it comes to cycling. Virtually every major and minor arterial and collector road is lined wih cycle tracks and bicycle-specific traffic signals. Some roads, called “green wave” are timed just right for a 14.5 mph cyclist to always get a green light. The sight of “cyclist rush hour” is inspiring. People in suits, skirts, high heels and work boots all use bicycles to get around. There are very few obese people in CPH. The mix of bikes to cars is jaw dropping. Thirty-seven percent of ALL trips are by bike! The average in Texas cities is about 1% or less.

Watch an excellent seven minute video about the public spaces in Copenhagen here.

MISSION BikeTexas advances bicycle access, safety, and education. We encourage and promote bicycling, increased safety, and improved conditions. We unite and inspire people and provide a cohesive voice for people who ride bikes in … END_OF_DOCUMENT_TOKEN_TO_BE_REPLACED