You are here: Home / BikeTexas BikeNews / BikeNews; Advocacy / “It’s bigger than a ride” – The Unpredictability of the Texas Legislature and Events at the Capitol 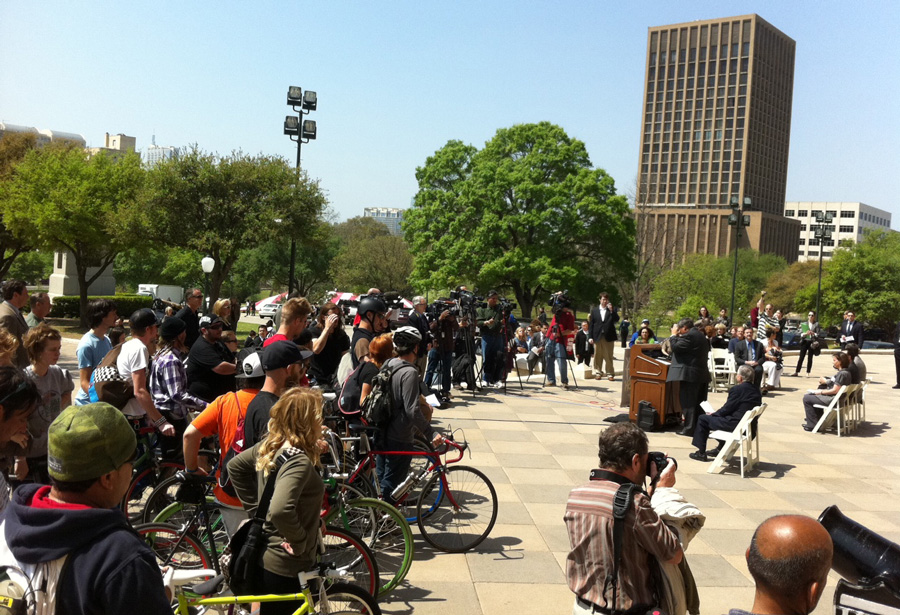 It’s fantastic to have local advocates on the ground all working toward the same global mission. Unfortunately, sometimes those very efforts can have implications on work already in progress. BikeTexas has over 20 years’ experience lobbying in the state Legislature. Over these years, relationships have been nurtured and networks have been formed, leading to progress on behalf of all cyclists in Texas.

Getting laws passed in Texas is very tricky. Many lawmakers have little–if any–experience regarding cycling, cyclists, and our concerns. A large portion of our work is to educate those lawmakers on the difference between law-abiding cyclists and law breakers. Critical Mass, for example, gets their attention in a negative way. To break through those barriers, BikeTexas must be diligent and respectful on how and when to approach the Capitol.

Cyclists’ presence at the Capitol is important, but should be planned for specific timing and support of key legislation. A good example is when a large group of cyclists turned out for a press conference in support of 2011’s Anti-Texting Bill. This presence was coordinated with the bill’s author by BikeTexas and other bill supporters. General rallies without coordination among groups working on state-wdie bicycle legislation are at best unproductive, and can even damage efforts already way and jeopardize support from legislators.

Tonight, Nov. 29, 2012, Please Be Kind to Cyclists is rallying at the Capitol to express outrage regarding the number of cyclist deaths on our roadways. We support this cause and we support rides of this nature, but not when these rides are stopping at the Capitol rather than riding through it. The danger to our shared cause is that lawmakers who see angry cyclists gathering at the Capitol may feel that cyclists are a threat and become entrenched in a refusal to work with cyclists – a sentiment BikeTexas has worked for decades to overcome.

We expressed these concerns to the Executive Director of PBK2C before plans were solidified. A rally through the Capitol without stopping there can keep the message on point without muddying our progress with the legislature. Lawmakers locally and statewide may feel that BikeTexas is behind this rally, and understandably so; our bike lights are being distributed at the rally, and reducing bicycling traffic fatalities to zero is a cause we all support. BikeTexas will feel the consequences of these actions moving forward, and this rally will make our 2013 legislative session even more unpredictable.

In addition, this ride conflicts with a previously planned fundraiser for an injured cyclist that is scheduled for 7pm tonight. Bike Austin, Social Cycling Austin, Cyclist Law and other advocates are supporting this fundraiser, and BikeTexas has offered our Tax Exempt ID for this event.

We ask as a courtesy that local groups notify us when rallies are planned at the Capitol, due to the sensitive nature of our legislative strategy. We’re very lucky in Austin to have so many passionate local advocates, but it’s important that Austin not be the only bike-friendly Texas city. We want our legislators to know that cyclists are an asset, not a problem. Let’s make sure all Texans have the same opportunity to ride!

MISSION BikeTexas advances bicycle access, safety, and education. We encourage and promote bicycling, increased safety, and improved conditions. We unite and inspire people and provide a cohesive voice for people who ride bikes in … END_OF_DOCUMENT_TOKEN_TO_BE_REPLACED