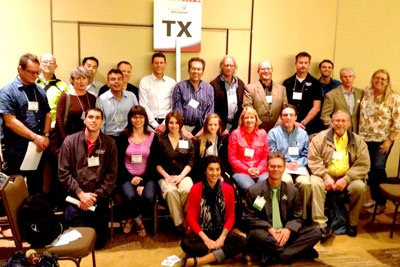 From March 20-22, 2012, BikeTexas led the Texas Delegation at the League of American Bicyclists’ National Bike Summit. Over 800 people attended from 49 states at the largest gathering of bicycle advocates of the year. We were able to meet with staff from just about every Texas Representative’s office as well as both Senator Hutchison and Cornyn’s office.

After the visit, the House and Senate passed a clean extension of the federal transportation bill, ensuring a few more months of funding for Safe Routes to School, Transportation Enhancements, and the Recreational Trails Program.

We will need to show a strong cycling voice over the next few months as debate begins over a new Federal Transportation Bill. Stay tuned for BikeTexas Action Alerts to learn how you can get involved!

MISSION BikeTexas advances bicycle access, safety, and education. We encourage and promote bicycling, increased safety, and improved conditions. We unite and inspire people and provide a cohesive voice for people who ride bikes in … END_OF_DOCUMENT_TOKEN_TO_BE_REPLACED