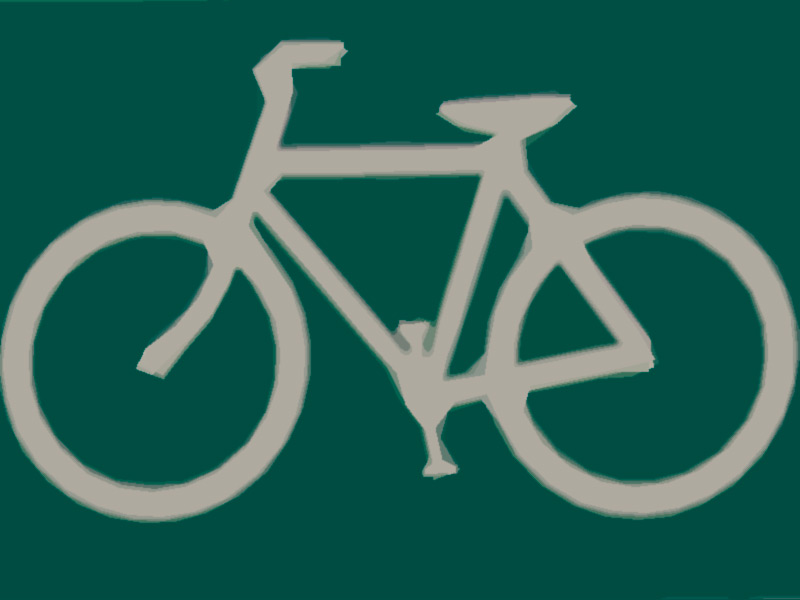 Hwy 4 Bike Signs
Palo Pinto County is a small rural county located about 50 miles west of Fort Worth. We have the Brazos River, two lakes (Palo Pinto Lake and Possum Kingdom Lake) and best of all, the Palo Pinto Mountains. This all adds up to great cycling.

Cyclists come from all around to ride our scenic, hilly rural roads. Highway 4 South between Palo Pinto and Santo is a big favorite – it includes Cherry Pie Hill, which is just under two miles long with an 8.5% grade. Story has it that a woman told her husband that if he could ride his bike up the hill, she would give him a slice of cherry pie. It winds around the mountain with no shoulders and is one of the most challenging climbs in North Texas. Hwy. 4 is also popular with the motorcycle crowd, and with ranchers and now oil trucks using it, this road is getting pretty busy. Most vehicles travel too fast around the blind bends to react if they were to come upon a slow moving bicycle. We needed some kind of warning signs!

I began writing letters to TxDOT three years ago asking for bicycle signage on Hwy. 4 to warn motorist of possible bikes. I received no response. This year I decided to circulate a petition among local residents and cyclists. I began by talking to my County Judge, Mike Smiddy, and getting his support and help with the petition. I next contacted the Texas Bicycle Coalition for any suggestions they might offer.

Then, of course, the real work began! I took my petition to the bike shops in Fort Worth, and sent it to Fort Worth Bicycling Association. I circulated it at every t-shirt ride, race and bike event I participated in. While I raced, my husband circulated the petition. 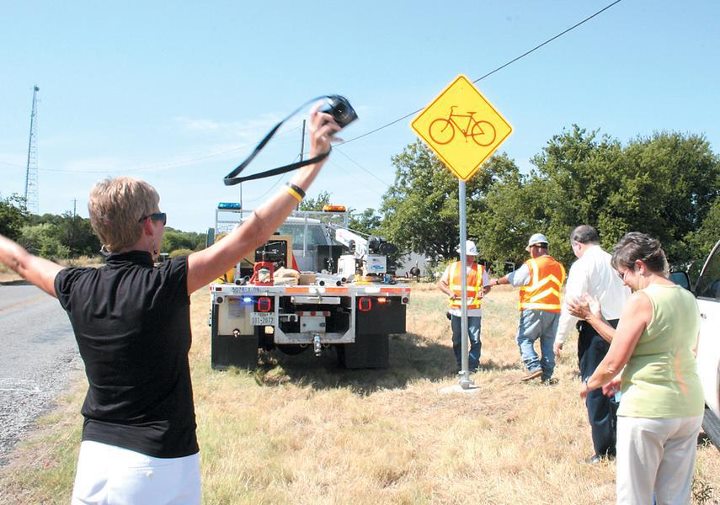 I then contacted our local Chambers of Commerce in Mineral Wells and Possum Kingdom and explained the economic benefits of promoting cycling in our county. They have supported cycling events in the past so they were not a hard sell. I also contacted some local businesses and organizations that I knew had benefited from cycling events in the area and they all gave me letters of support.

I timed it all so I could present my petition to the Palo Pinto County Commissioners Court during Bike Month (May). The Court adopted a Resolution in support as did the City of Mineral Wells during their City Council Meeting.

I had to do a little research to figure out to whom to send all this! I sent everything to Carlos Lopez, Director of TxDOT Traffic Operations in Austin. It also went to Jimmy Bodiford in the Fort Worth TxDOT Office and John Cordary in the TxDOT Weatherford Office. I gave Jerry Vandaveer, in the TxDOT Mineral Wells Office, a courtesy call to let him know about it as well. Within three weeks I received a letter saying TxDOT would install bicycle signs along Hwy. 4 and a week and a half later they went up!!

Kudos to Iris for her hard work! Following this model to replicate her success in your community takes solid planning and patience. It’s important to be in contact with the different offices of TxDOT involved in the process, and to get commitment from local elected officials and buy-in from local businesses, organizations, and of course, area cyclists. Each of the 24 TxDOT Districts varies in its response to such requests, but demonstrating comprehensive community support greatly increases your chances of success.

MISSION BikeTexas advances bicycle access, safety, and education. We encourage and promote bicycling, increased safety, and improved conditions. We unite and inspire people and provide a cohesive voice for people who ride bikes in … END_OF_DOCUMENT_TOKEN_TO_BE_REPLACED