Thursday, June 16, 2005 On February 3rd, 2005, Bahram Daneshvar and Charles Thiele, both visiting Fredericksburg from Minnesota, set out on their bicycles to experience the fabled Texas Hill Country. The two cyclists were touring with a group of about 50 cyclists from Minnesota that had traveled to Fredericksburg specifically to ride the roads which […]

Wednesday, September 17, 2008 David Boyd, native Houstonian and avid mountain bike racer, died on September 3, 2008 in a climbing accident in Colorado. He was 47 years old. Dave was a radiologist, practicing in northwest Houston, and a dedicated outdoorsman. He founded and was captain of the M.O.A.T adventure racing team and competed in mountain […]

Monday, September 17, 2012 It is with heavy hearts that we mourn the loss of Iris Stagner, a member of the BikeTexas family.  She worked as an administrator in Palo Pinto County and was a mother, wife, BikeTexas board member, friend, state leader in promoting bicycle safety and education, and avid bicycle racer. Iris was […] 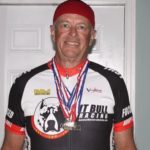 Monday, January 7, 2013 Bob Pharr died Monday after being struck by an SUV while he rode his bicycle. (Image from the news article reporting Mr. Pharr’s death.) Bob Pfarr Jr was a competivie cyclist for 53 years. He first started competivie racing in his hometown of Kenosha, Wisconsin. He held both a Competition and Coaching license from […] 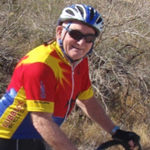 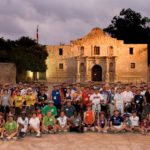 About 150 state senators, representatives, spouses and legislative staff donned helmets and mounted bicycles just past dawn in front of the Alamo on the morning of Thursday, August 11, 2011 as they prepared to participate in the 7th annual NCSL Bipartisan Bike Ride,  The ride was co-hosted by Senator Rodney Ellis (D-Houston), Representative Linda Harper-Brown […]

On May 5, Representatives from California and Ohio introduced the Safe and Complete Streets Act of 2011, which would require state departments of transportation and metropolitan planning organizations (MPOs) to write and adopt Complete Streets policies to apply to projects using federal funding. The bill is H.R. 1780. Currently, no Texas members of Congress are […] 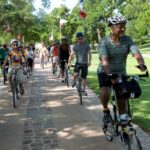 The Superintendent of the Texas State Cemetery attempted to ban cyclists from riding through the scenic cemetery. Although there was no explicit reference to bicycles in HB 2091, the bill analysis cited problems the cemetery has had with “an increase in bicycle traffic, which some claim has led to disruptions of tours, ceremonies, and other […]

MISSION BikeTexas advances bicycle access, safety, and education. We encourage and promote bicycling, increased safety, and improved conditions. We unite and inspire people and provide a cohesive voice for people who ride bikes in … END_OF_DOCUMENT_TOKEN_TO_BE_REPLACED