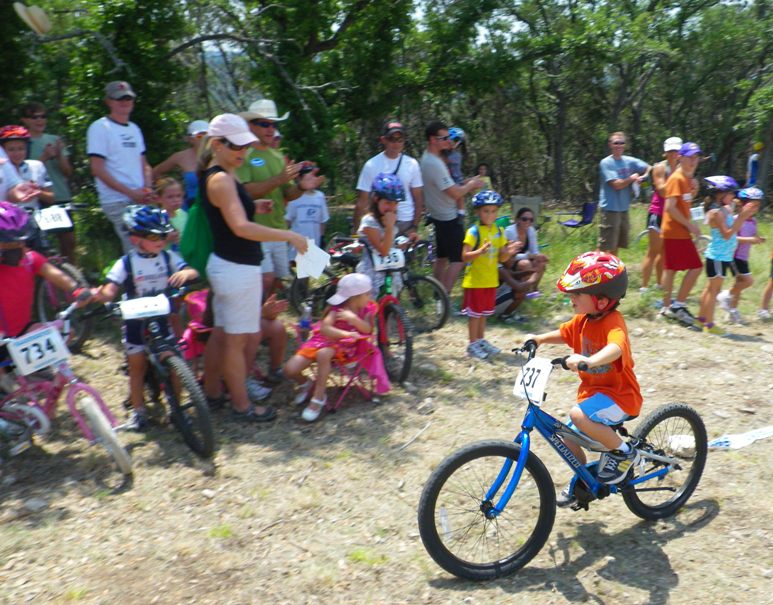 Though it was hot as blazes on Saturday, May 29, the young Kids Kup racers at the Mellow Johnny’s Classic didn’t seem to mind! Turnout was high – almost 50 kids participated in the races. The course was an extremely challenging one because of the rockiness of the ground, and more than one rider took a spill, resulting in a few scraped knees and elbows. But almost everyone toughed it out, got back on the bike and finished the course!


The fun didn’t stop when the races were over. After everyone wished luck to BikeTexas Kids Kup race coordinator Rick Wetherald in his races that afternoon, we got to the giveaways! Each racer wrote his or her name on their race number, and the numbers were drawn out of a box to give away helmets, and also seat bags and bike computers donated by Trek. Trek also donated enough bells to give one to each child. Then the kids had a blast destroying two pinatas. All in all, it was a great end to the BikeTexas Kids Kup at the TMBRA Spring Series. Click here to see the schedule for the fall 2010 series.

MISSION BikeTexas advances bicycle access, safety, and education. We encourage and promote bicycling, increased safety, and improved conditions. We unite and inspire people and provide a cohesive voice for people who ride bikes in … END_OF_DOCUMENT_TOKEN_TO_BE_REPLACED