You are here: Home / BikeTexas BikeNews / BikeNews; Education Fund / KidsKup 2013 Off to an Exciting Start 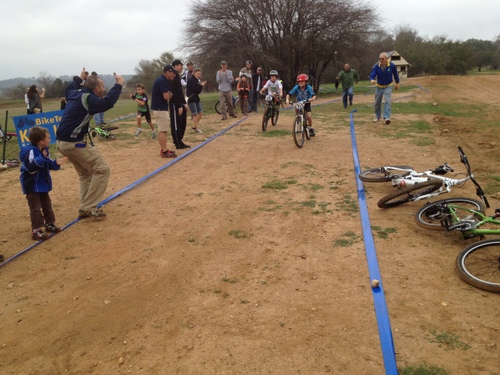 Saturday, February 9, dawned grey and dreary, with some drizzle and light rain. BikeTexas staff headed out to Smithville to kick off the 2013 KidsKup series with the Rocky Hill Roundup. Before long, we had over 30 children registered and the course was laid out, so the course opened for pre-riding.

The first rider on the course was a two-year-old on his strider bike. He rode all over until his dad convinced him to ride within the blue lines, but the young man took Dad at his word and rode directly on the blue line! The other children and their parents enjoyed watching him make the first lap, and then all of the riders were on the course, each taking turns. It was very refreshing to see that the children’s and parents’ enthusiasm was not dimmed in the least by the dismal weather.

Their enthusiasm spread to everyone in attendance and before long we had a fairly large crowd of not only riders but a great group of parents and siblings of the riders. There was also a group of the older children who were to race in the teens’ official race later, but who gathered to watch the younger competitors.

At noon, all of the KidsKup riders gathered for the mandatory riders’ safety meeting, which is similar to the safety meetings for the adults. The exception for the younger riders is the emphasis on always wearing helmets, along with some street riding safety. By the time the safety meeting was finished, the children were all ready to ride.

The announcer, Jeff Chattin from Trek, helped build enthusiasm in the crowd as he called the racers to the start line. Racing at KidsKup always starts with the youngest riders– this is normally also the smallest group. As the older groups had their turns in succession, the crowd of supporters continued to grow. The oldest group lined up and they were getting ready to start when one of the parents shouted “Please wait!” They had just arrived and the youngster wanted to race. Mr. Chattin held the other riders just long enough for someone to put the number on the bike.

Mr. Chattin cried out “GO.” Straight off the line, this was a very competitive race. The young man who had arrived last jumped to an early lead and continued to widen the gap. However, at the last turn before lap two he slid and went down. This allowed the second place rider to pass him. The fallen rider recovered right away and the two young men had a mad sprint to the finish with the formerly second place rider holding off the challenger to beat him to the finish line. At such an exciting finish, there was a lot of loud cheering from parents, riders that had finished earlier, and by some of the adult MTB racers scheduled to race later in the day. All the young riders congratulated one another and displayed great sportsmanship.

The Rocky Hill Roundup was a great start to a new, longer season of the BikeTexas KidsKup 2013. Don’t miss out on the next race! See the complete schedule here for a race near you.

MISSION BikeTexas advances bicycle access, safety, and education. We encourage and promote bicycling, increased safety, and improved conditions. We unite and inspire people and provide a cohesive voice for people who ride bikes in … END_OF_DOCUMENT_TOKEN_TO_BE_REPLACED