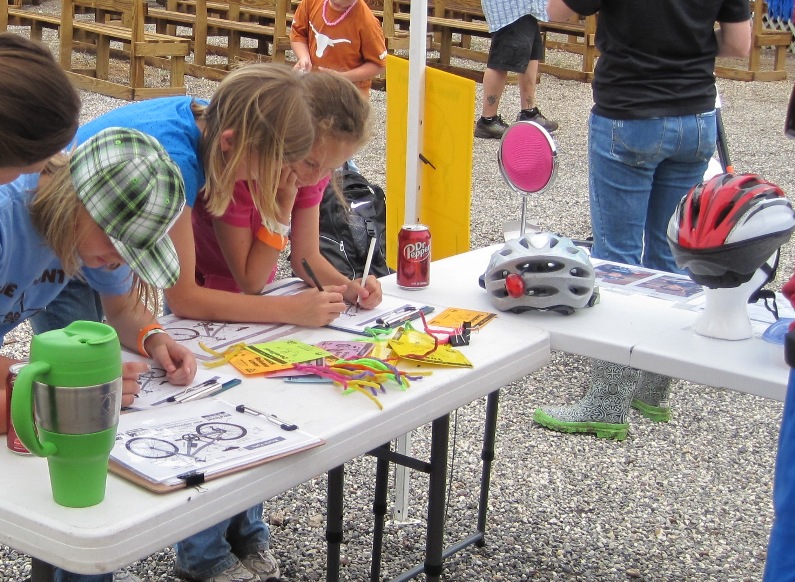 On May 15, 2010, BikeTexas staff worked with Bluff Creek Mountain Bike Ranch Manager (and bike shop proprietor) Jon Holmes to conduct a bicycle safety booth at the Lee County Fair in Giddings. Children and their parents were able to try out some of the new games developed by BikeTexas. The new games were developed to be used outdoors, under windy conditions. They were well received by the children. They also passed the windy weather test. The games were designed to be of interest to adults too.

The event was the first time these games were introduced. All of the children were engaged. “This is fun!” was the positive feedback of one young boy. The games use multiple senses to increase learning. Using bean bags, each printed with a bike safety law, the students finds the matching law on a laminated sheet that is taped to the table. The student reads the law when they find the match and can also be asked to explain the law. Another game teaches the bicycle parts with a fill in the blank activity. They can also tag the bicycle parts on a real bike. The tagging game can be done individually or as a team relay. Having fun and learning bicycle safety is the goal.

MISSION BikeTexas advances bicycle access, safety, and education. We encourage and promote bicycling, increased safety, and improved conditions. We unite and inspire people and provide a cohesive voice for people who ride bikes in … END_OF_DOCUMENT_TOKEN_TO_BE_REPLACED