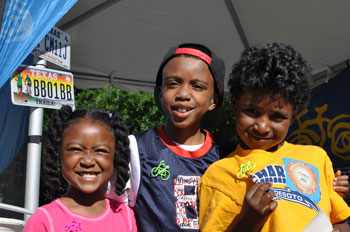 On the weekend of the 20th of April, BikeTexas was thrilled to be a part of this year’s Earth Day Dallas event. Held at Fair Park, the scale of the event was much larger than anticipated. There were over 500 exhibitor booths. With everything from healthy food vendors to college and university booths featuring sustainability programs, green businesses and non-profits, and even live music, there was no shortage of stimulation and inspiration to live a greener life.

BikeTexas spent the weekend in a beautiful spot right on the lagoon in Fair Park. With near perfect weather all weekend, the masses flowed by at a steady pace for most of Saturday and Sunday.

Being a free event with so much going on, Earth Day Dallas 2012 was a great event for families and children. Over the course of Saturday and Sunday, BikeTexas had the pleasure of distributing over 1,500 bike safety coloring books and A to Z by Bike comic books for young cyclists and soon-to-be cyclists, in addition to recruiting new participants for the BikeTexas KidsKup on May 5 in Cedar Hill. We even helped several parents with some advice for getting kids off training wheels (hint: take off the pedals!). 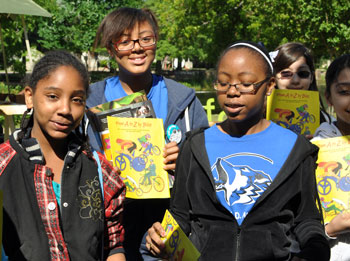 While distributing materials for kids, we were also able to collect many new signatures for the Complete Streets petition. Earth Day Dallas attendees seemed to be overwhlemingly excited about the necessity of Complete Streets, in urban and rural areas all over DFW, citing concerns over safety for themselves and loved ones while out bicycling and walking. This support for making a Complete Streets bill become state law in 2013 was reaffirming since BikeTexas’ relies on support from members across the state to make great improvements for cycling all over Texas.

It was already apparent that the situation for bicycling is improving in DFW. Time after time, one person would complain that Dallas was the worst place for biking in the world, and the next person would come along and say exactly the opposite! Whether it was the new trail from White Rock Lake leading into downtown Dallas, bike lanes and sharrows in Fort Worth, “share the road” signs in Richardson, or the great biking culture in Oak Cliff, folks were excited to share stories from all over DFW of how things were getting better.

Dallas Bicycle Coordinator Max Kalhammer came out for the weekend to give attendees a glimpse of things to come. Showing off an oversized map with the amazing and ambitious Dallas Bike Plan, it’s easy to see that wilth the right amount of funding and political will, many believe that Dallas will be the best place to ride a bike in Texas. 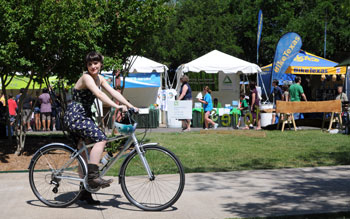 Groundwork Dallas is another group with a great vision of things to come, and taking great steps to make it happen. Groundwork is dedicated to preserving and enhancing the usability of the Great Trinity Forest, America’s largest urban park and the largest parcel of old-growth bottom-land forest. Utilizing summer internships with high school students, Groundwork teaches about nature preservation and trail building while utilizing volunteer labor to clean trash out of the forest. Groundwork hopes that the soon-to-come mountain bike and hiking trails will help DFW-area residents connect with the forest and demand its future preservation. Peter Payton, Groundwork’s Executive Director, came to the February 2012 Texas Trails and Active Transportation Conference to help jumpstart their trail building program.

reTREEt America was also at the Earth Day event. The group formed recently after a event that involved a bike ride from Austin to Bastrop to plant trees in areas affected by last summer’s fires, and now calls themselves “a kaleidoscopic group of bicycle and tree enthusiasts with strong backs, sharp minds, and big hearts who volunteer to replant communities.” It was great to see former BikeTexas Landscape Architect Student Intern Patrick Beyer working the booth for reTREEt.

MISSION BikeTexas advances bicycle access, safety, and education. We encourage and promote bicycling, increased safety, and improved conditions. We unite and inspire people and provide a cohesive voice for people who ride bikes in … END_OF_DOCUMENT_TOKEN_TO_BE_REPLACED