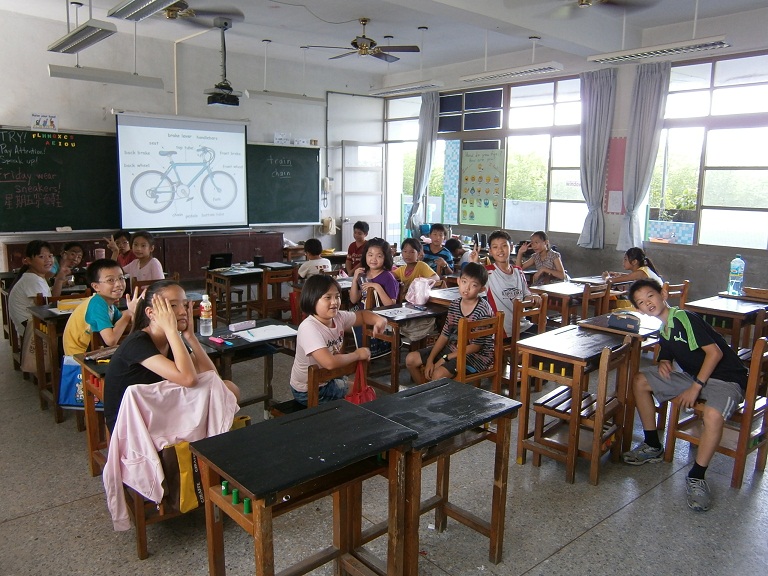 On a hot July afternoon in the southern Taiwan town of Si Gang, just north of the city of Tainan, a group of third and fourth graders can be heard shouting encouragement and instructions to their teammates. What’s unusual is that they’re yelling in English, not their native language of Mandarin Chinese.

These 28 rambunctious kids have gathered for a week-long English learning summer camp at their school, Si Gang Elementary School, taught by their Foreign English Teacher and Texas SafeCyclist Kevin Milligan, formerly of Sugar Land, Texas. Taking advantage of being able to design his own summer camp curriculum, Kevin decided to include his love of cycling and some of the elements he learned at SafeCyclist training in the week’s lessons.

Friday morning started with a classroom session of general safe riding rules as well as learning bicycle part names in English using an actual bike as a visual aid. Kevin had reminded the students to wear sneakers that day for safety, and several students rode their bikes to school to serve as props during the morning’s activities. It’s unusual in most areas of Taiwan for elementary students to ride bikes to school, while it’s very common for junior high and high school students to do so. There’s also a growing trend for kids to wear bike helmets with many schools making it mandatory. 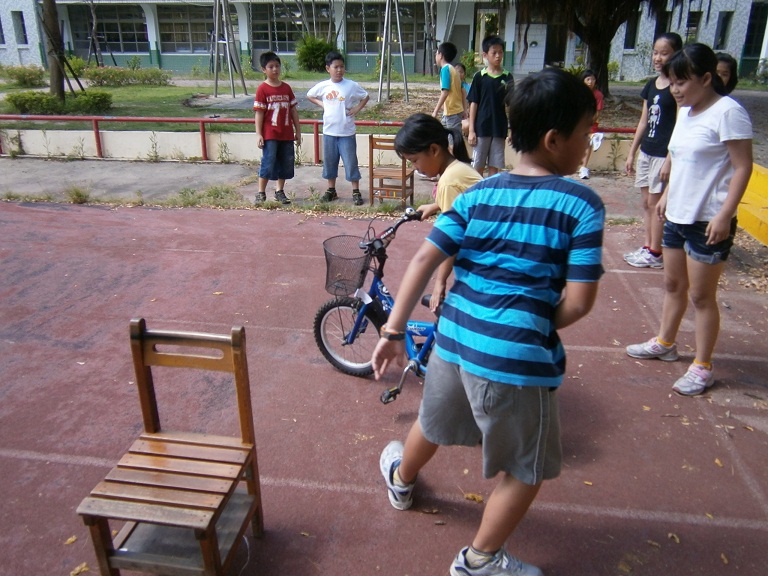 After the classroom session of English learning, the students’ retention was put to the test with a bike parts labeling relay race that Kevin had learned at his SafeCyclist training in Pasadena years earlier. Two bicycles of similar style and size were placed about 20 yards away and the two teams were given laminated label cards to attach to their team’s bike. At the starting signal the high pitched yells and fervor began. Back and forth they ran at top speed to be the first team with all labels correct. While one team did prevail by a few seconds, it was exciting for Kevin, as their English teacher, to discover that both teams had placed every label correctly. Then the second race began to remove the labels from the bikes. The second place team from the first race was vindicated with a win in the second race. One final relay race just for fun was created using very small bikes where the students were required to remain seated and push the bike with their feet down and back around a chair placed about 20 yards away.

The morning ended with the students being very hot and tired, but with smiles all around. Kevin has used elements from SafeCyclist for the past three years during English summer camps in Taiwan. It provides the students with a good English learning opportunity not normally covered in a regular classroom setting, and of course allows them to practice the English vocabulary in a fun and exciting way. Look for ways to incorporate elements of SafeCyclist training in other ways, just as Kevin has found a way to use it in English language learning in faraway Taiwan.

MISSION BikeTexas advances bicycle access, safety, and education. We encourage and promote bicycling, increased safety, and improved conditions. We unite and inspire people and provide a cohesive voice for people who ride bikes in … END_OF_DOCUMENT_TOKEN_TO_BE_REPLACED