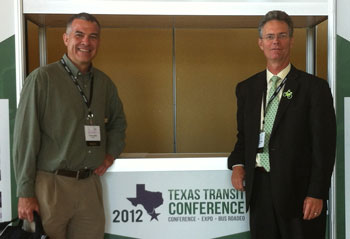 Top leaders from transit authorities from all over Texas attended the Texas Transit Conference at the beautiful modern convention center in McAllen, TX during April 21-26, 2012.

The conference featured many excellent breakout sessions and keynote presentations for people interested in the many issues facing transit operators.

On Tuesday, April 24, Executive Director of BikeTexas spoke at a panel called Bikes and Transit, along with Charles Riou, the State Bicycle Coordinator for the Texas Department of Transportation and John-Michael Cortez, Assistant Director at Austin’s Capital Metro.

Mr. Riou spoke first, about the overall synergy of connecting bicycling and transit. Next
Mr. Cortez gave an excellent presentation on what Cap Metro is actively doing for bicyclists – including a planned rail-with-trail corridor and secured bike cage bicycle storage at the Kramer train station. Mr. Stallings discussed the “last mile” – the importance of planning for the future of bikes on transit, including the possibilty of folding bikes as a way of increasing capacity of bikes on transit, and electric bikes and how that might impact the future catchment area for a given transit stop.

MISSION BikeTexas advances bicycle access, safety, and education. We encourage and promote bicycling, increased safety, and improved conditions. We unite and inspire people and provide a cohesive voice for people who ride bikes in … END_OF_DOCUMENT_TOKEN_TO_BE_REPLACED