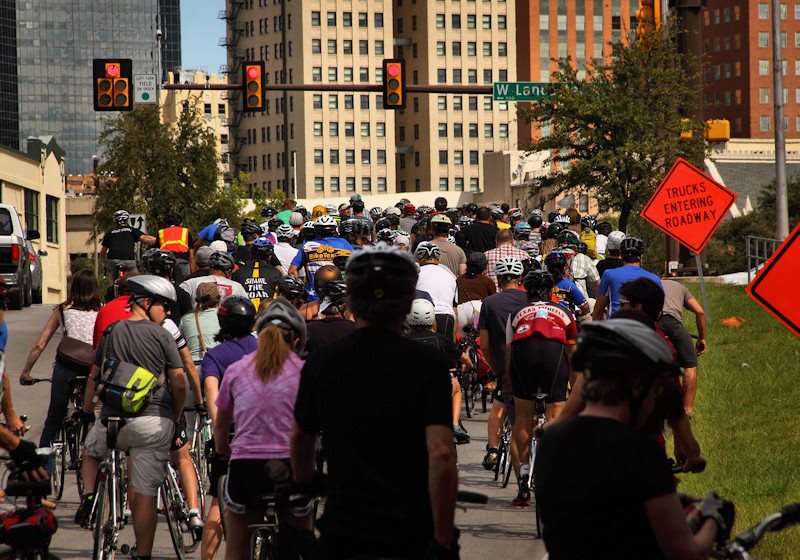 Fort Worth resident Zac Ford was the victim of a hit-and-run driver in early August. All he remembers of the incident was riding along on his bicycle and then waking up in a hospital. He was fortunate to have relatively minor injuries, but he was left with a sizeable hospital bill and no bicycle, since his assailant has not yet be caught. To help him out, the Fort Worth bike community rallied around and organized a fundraiser in his honor. Additionally, Zac’s friends and fellow cyclists want to be sure that Texas streets and roads are safe for cyclists and pedestrians of all ages, so some of the evening’s proceeds went to BikeTexas to help promote bicycle safety and education throughout Texas. The event organizers invited BikeTexas to attend.

About 170 riders departed from Zio Carlos in Fort Worth to the site of the accident and back again. Participants were treated to three live bands, as well as a raffle with prizes donated by local businesses. An organization of air traffic controllers who know Zac came together to get him a new bike, but he was not the only lucky recipient of a new set of wheels that evening: The final raffle prize was a new carbon fiber bike frame and fork. The man who won this bicycle was also without a bicycle due to another hit-and-run accident in back May, but he has not yet fully recovered from his injuries. He tearfully told the crowd that he thought they would release him to get back on the bike in November.

Altogether, about 200 people from Fort Worth and the surrounding communities came out to the fundraiser. BikeTexas is honored to have been invited and receive part of the night’s proceeds, but more importantly, we’re delighted to see such a strong and dedicated cycling community that wants to make a difference in their city.

MISSION BikeTexas advances bicycle access, safety, and education. We encourage and promote bicycling, increased safety, and improved conditions. We unite and inspire people and provide a cohesive voice for people who ride bikes in … END_OF_DOCUMENT_TOKEN_TO_BE_REPLACED