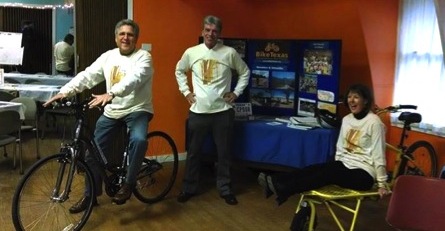 The City of Seguin hosted the Walnut Springs Trail Blazing Workshop November 22-23 at the Teatro De Artes De Juan Seguin Cultural Center near the Walnut Creek Trail and Greenbelt trailhead. The city is ready to move ahead with plans for Phase II of the trail after landing a Transportation Enhancement Grant for $1.8 million from TxDOT. The total trail will start from the northwest corner of town on SH 78, pass along Texas Lutheran University and an under-development and yet-to-be-named flagship park on 48 acres just acquired by the City.

BikeTexas staff was invited to present and participate on the resource team to support the workshop. Along with issues of making biking and walking mainstream daily activities in Seguin, participant brainstorming heavily explored public participation in art and civic activities along the trail.

The wide concrete trail runs past a number of historic structures and sites with public use potential to Walnut Springs Park in downtown Seguin. This park was originally designed in the 1930’s by Robert Hugman, who later developed the San Antonio River Walk. Elements of the CCC stonework have been restored and incorporated into a Phase I renovation of the park completed with local funds in 2011.

The City is working with the U.S. Army Corps of Engineers on an ecosystem restoration project along the creek. The City will also build a library overlooking the downtown section as voters approved a bond measure this past November 5.

Once funding is secured, a future project will extend the trail along the creek corridor to the existing flagship Max Starke Park on the south side of town along the Guadalupe River. Neighborhoods of all economic and ethnic backgrounds lie along the trail.

The City is also conceptualizing and drafting a citywide, on-street bike/pedestrian network to complement the trail and connect with neighborhoods, schools, retail shops and stores, employment centers and other destinations.

The workshop was sponsored by a partnership of the City of Seguin and the Citizens’ Institute on Rural Design (CIRD) after the City was one of four chosen by CIRD from 30 nation-wide applications for the workshop. CIRD is a National Institute for the Arts initiative in partnership with the U.S. Department of Agriculture, the Project for Public Places, the Orton Family Foundation, and the CommunityMatters partnership.

Seguin, founded in 1838 and named for Texas Hero Juan Seguin, is one of those best-kept secret small Texas towns with great assets. This entire trail effort shows that many diverse elements can be brought together to develop a functional and desirable walking and biking environment for residents and visitors. BikeTexas will continue to provide support to the City of Seguin and citizens as they move from vision to reality for bikeable/walkable destinations in their town.

Photo: Sara Askey. Seguin Mayor Don and Marty Keil try out bikes from the BikeTexas fleet with BikeTexas staff member Mark Stine at the Walnut Springs Trail Blazing Workshop on November 23. The Mayor and Mrs. Keil both cycle in and around Seguin.

MISSION BikeTexas advances bicycle access, safety, and education. We encourage and promote bicycling, increased safety, and improved conditions. We unite and inspire people and provide a cohesive voice for people who ride bikes in … END_OF_DOCUMENT_TOKEN_TO_BE_REPLACED