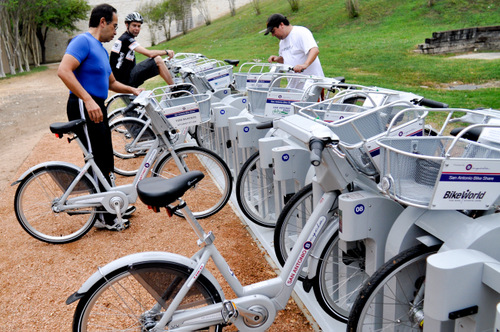 Bike sharing is coming to Austin! Joining San Antonio, Houston, and Fort Worth, Austin will soon become the fourth Texas city to have a bike sharing program. (El Paso is hard at work to become the fifth Texas bike share city.) In the meantime, the City of Austin’s Public Works Department and local non-profit Bike Share of Austin need your input. They’re requesting feedback from the public to identify bike share locations throughout the city.

Individuals are asked to suggest where they would like a station to be placed and vote for already suggested locations. Participants are also asked to select a color preference for the bikes. Feedback will be collected through August and may be submitted at www.votebikeshareaustin.com.

In July and August, members from Public Works’ Bicycle Program and Bike Share of Austin will also be gathering citizen input in person at various Austin locations. Two main events will be held: one at Capital Metro’s Plaza Saltillo Station on July 29 and the other at Austin City Hall on August 1. Participants will be able to speak to staff members about bike share, suggest and vote for locations, and view bike share equipment. See the complete schedule of public activities on the City of Austin website.

Not sure what bike share is? Here’s an overview:

About bike share:
Bike sharing will help ease Austin’s traffic congestion and aid in closing “first and last mile” transit gaps in the bus and rail systems. It will help the user stay healthy and decrease pollutants in the air by reducing the amount of single-occupant motor vehicle commutes. Bike sharing allows the user to pick up a bike from one location and ride it to another location.

About Bike Share of Austin:
Bike Share of Austin is the City’s Managing Partner for the Bike Share Program. The local non-profit organization will handle the day-to-day operations of Austin’s bike sharing system, including maintenance of the bicycles, marketing the system, and securing station sponsorships.

If you are interested in learning more about this project or have any questions, please contact Shannon Wisner, Public Information Specialist, at (512) 974-7704 or Shannon.Wisner@austintexas.gov.

MISSION BikeTexas advances bicycle access, safety, and education. We encourage and promote bicycling, increased safety, and improved conditions. We unite and inspire people and provide a cohesive voice for people who ride bikes in … END_OF_DOCUMENT_TOKEN_TO_BE_REPLACED