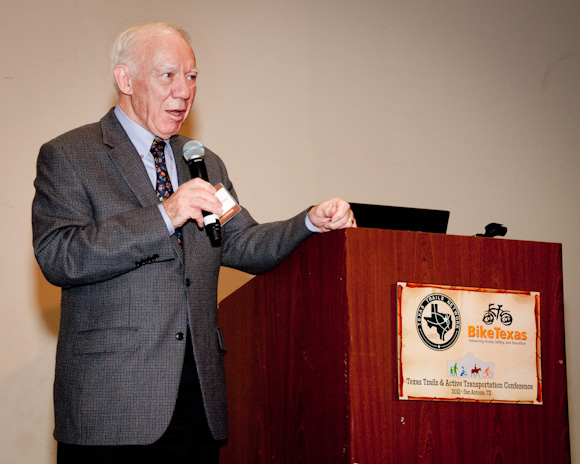 Professionals and advocates that create, promote, and use active transportation (i.e. walking, biking, transit, etc.) convened at the Texas Trails and Active Transportation Conference in San Antonio from February 1 to 3, 2012. They shared ideas and momentum to make Texas a great place to walk and bike. Building upon the success of the first TTAT Conference held in Austin in 2010, well over two hundred participants attended from forty-seven Texas cities, as well as Califonia, Kentucky, and Canada. The conference was jointly hosted by BikeTexas and the Texas Trails Network.

A full and distinguished schedule of presenters addressed active transportation in Texas from every angle. One day was dedicated to almost entirely to in-depth workshops, including the Texas Bike/Ped Advocates Workshop, a gathering of advocates from around the state facilitated by Charles Gandy, which dealt with different approaches to creating bicycle and pedestrian friendly streets.

Thursday and Friday were largely dedicated to breakout sessions that covered a wide range of topics. More than thirty different topics were addressed. Speakers covered everything from their city’s master trail and bike plans to “How Urban Design Affects Property Values.”

Notable in the lineup were the sessions on San Antonio’s efforts to create and encourage a bicycle and pedestrian culture. Fighting urban sprawl and poor public health, the city has made numerous, notable attempts to improve quality of life by promoting active lifestyles to its citizens.

Not a minute was wasted, and during meals, there were many keynote speakers.

John Burke, CEO of Trek Bicycles spoke on his vision for a better America, one that includes dramatic increases in bicycling for transportation, recreation, and health.

Keith Laughlin, President of the Rails-to-Trails Conservancy, addressed “Active Transportation and the Charisma of Place.” He made the case for biking as “cool,” and for “cool” as the driving force behind attracting young, enthusiastic workers and creating a vibrant public culture in cities.

A unique feature of the TTAT Conference were the Mobile Workshops, which got attendees out of the conference rooms and onto the streets (and trails) of San Antonio. Each afternoon, conference presenters led groups on walks, rides, runs, and even paddle tours of different neighborhoods and features of the host city. The knowledgeable local guides brought the principles discussed that morning to life as they led their groups through tours as varied as an introduction to the new local bike share system to viewing the San Antonio River Improvements Project.

MISSION BikeTexas advances bicycle access, safety, and education. We encourage and promote bicycling, increased safety, and improved conditions. We unite and inspire people and provide a cohesive voice for people who ride bikes in … END_OF_DOCUMENT_TOKEN_TO_BE_REPLACED