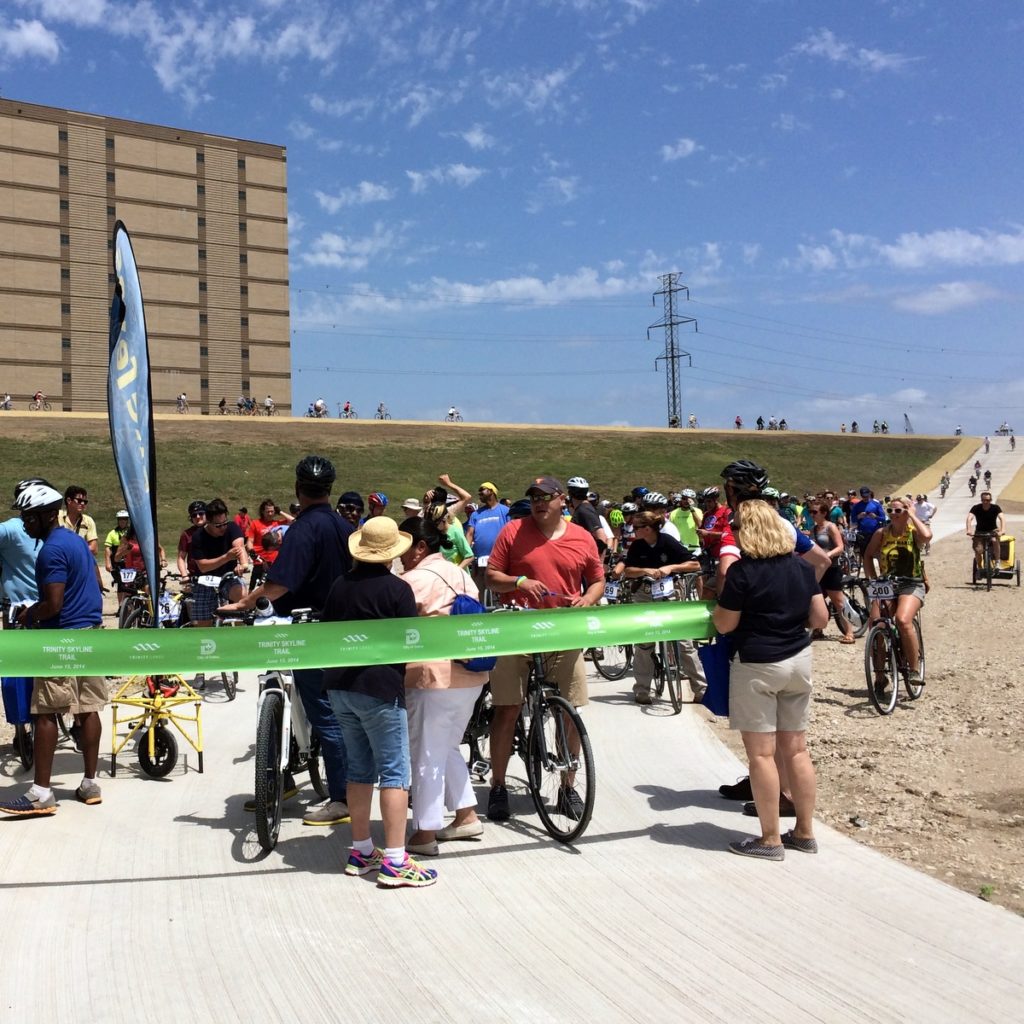 On Sunday, June 15, people who ride bikes in Dallas celebrated not one, but four grand openings of new bike/ped facilities! Despite the heat and wind, about 300 people came out with their bikes to celebrate the Rolling Ribbon Cutting on the Continental Bike/Ped Bridge, the Trinity Skyline Trail, the Sylvan Avenue Bridge, and the West Dallas Gateway Plaza.

Mayor Rawlings along with current and former city council members rode through the crowded bridge, smiling and waving and cooling off in the bridge’s new fountain spouting cool water up from the bridge walkway. Congresswoman Eddie Bernice Johnson was present for the first ribbon cutting on the Continental Bridge, as was Mary McDermott Cook, the chair of the board of directors of the Trinity River Trust Foundation, which was instrumental in securing funding for the project. At each of four ribbon cuttings, the Mayor, council members, contractors from HNTB, and local advocates–including the president of Bike Friendly Oak Cliff— spoke to the power of partnerships that helped get these facilities built. At one point, Mayor Rawlings decided to test out the electric bike from Rocket Electrics he was riding and zoomed along with his security detail struggling to keep up.

While preparations for the ride were underway on Saturday, someone from the neighborhood stopped the BikeTexas staffers to talk about the new bridges and trail system and said, “This is the best thing that I’ve seen happen to link my neighborhood to the rest of Dallas.” He went on to talk about how his neighbors would be able to safely ride to get to jobs in other parts of Dallas now, whereas before they would have had a dangerous crossing over the bridges without dedicated bike or pedestrian infrastructure. That’s exactly why we want to see more facilities like this across Texas– to give people the peace of mind they need to try riding to work, or the supermarket, or a community meeting, or school, as well as for recreation. Congratulations, Dallas, on your new facilities along the Trinity River!

MISSION BikeTexas advances bicycle access, safety, and education. We encourage and promote bicycling, increased safety, and improved conditions. We unite and inspire people and provide a cohesive voice for people who ride bikes in … END_OF_DOCUMENT_TOKEN_TO_BE_REPLACED