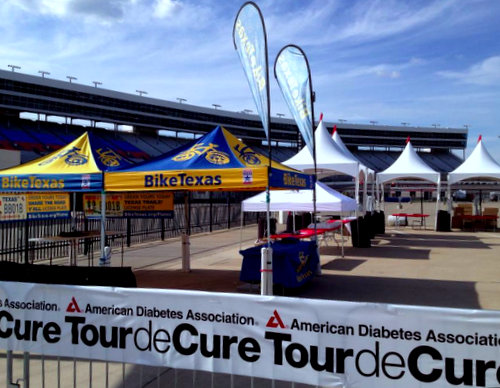 BikeTexas’ first trip to Texas Motor Speedway and the North Texas Tour de Cure would not be a disappointment! The arrival to the speedway was somewhat intimidating, as there is what seemed like a thousand acres of parking lots and not much signage to direct you to the infield where we would set up our booth. But with a little determined driving we located the entrance to the infield and found where we would have our booth. When told where it would be our first thought was “Oh no, right at the back,” but this turned out to be the starting point for all of the rides plus the announcers stage was next to our booth–perfect spot to be in. The area was open to vendor and booth set up the afternoon before the ride, so the booth was set up and ready to go early the next morning. The ride was well attended and the goal of the Tour de Cure is fund raising. It seemed they were successful in number of participants and amount of money raised.

The ride was kicked off by the singing of the National Anthem by a middle school young lady, who is also living with diabetes. After the National Anthem one of the youngest attendees was asked a few questions about her life with diabetes and then the first wave of riders was off. This was the 100 mile ride, the remaining groups would start at intervals according to their distance to ride. At the start of each wave of riders the young lady would again sing the National Anthem and the riders would start off. This continued throughout the morning until the last riders were called to the start line.

The last group, the one we were in, rode around the Race Track at Texas Motor Speedway, and no, we weren’t as fast as the race cars that normally race around the track. But it was exciting to know we were riding where just a short time before cars were circling the track at almost 200 mph. So our 15 to 20 mph seemed very slow in comparison. But the enthusiasm of the riders was just as high as if they were traveling along at the speed of a race car. To be able to ride along beside the youngest rider there and hear her almost begging her mom to let her ride up on the high banks of the corners. Then at the end of the ride to see her and the oldest rider standing hand in hand talking about the ride and the challenge of living with diabetes. When asked what this ride stood for in her mind she was quick to answer, “That all of these people riding today want a cure for diabetes as bad as I do!” The ride raised in the neighborhood of $500,000 to go toward research for a cure for diabetes.

This was a well ran ride for a great cause and BikeTexas was glad to be a small part of it and to be able to contact as many people as we did to give each one just a little bit of information as to how to make cycling better all across Texas for everyone.

MISSION BikeTexas advances bicycle access, safety, and education. We encourage and promote bicycling, increased safety, and improved conditions. We unite and inspire people and provide a cohesive voice for people who ride bikes in … END_OF_DOCUMENT_TOKEN_TO_BE_REPLACED