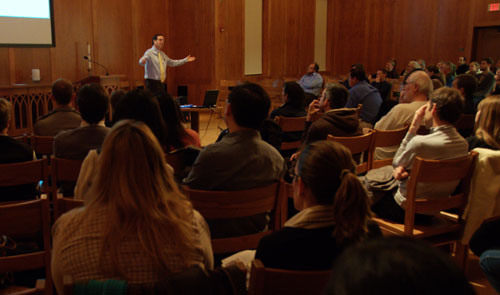 While a rare snowstorm gathered outside, Gil Penalosa spoke to a public crowd Thursday night, February 3, at St. David’s Episcopal Church downtown, as the closing event in the 2011 Shifting Gears Lecture Series. For over two hours, Mr. Penalosa captivated the audience of cyclists, pedestrians, bike shop owners, transportation and health officials, and more. He spoke of the need for unitiing a broad coalition and creating a sense of urgency to build a better Austin now.

Using examples from cities such as Copenhagen, Amsterdam, Seville, Bogota, and Guadalajara, Mr. Penalosa showed how cities can quickly generate a massive shift in bicycling, walking, and transit mode share. He focused not on feats of engineering, but rather the need to create places for people, vibrant communities that allow people to feel safe and respected while getting around without an automobile. According to Mr. Penalosa, walking, biking, and public transit are all pieces of a puzzle, with good public spaces acting as the glue that holds them all together.

Mr. Penalosa discussed the benefits of creating liveable communities of people walking and biking, such as positive health outcomes, safety, and vibrant economic activity. “50,000 people buy a lot more than 93 cars,” he said, in conclusion to a story about business owner resistance to creating a pedestrian-only street.

But his focus was on what he called “changing the chip”, generating a sea-change of mindset in terms of our actions that build the city. “How do we want to live?” was a question asked several times throughout the night. “The city is a means to a way of life,” he pointed out, and implored the audience to think outside the box when considering how to use what is the largest amount of public space in any area – the streets. “Do we want our streets to look like car storage, or do we want them to help create vibrant places for people?” he asked, while showing slides with various examples from both viewpoints.

Mr. Penalosa also discussed at length the concept of the Ciclovia, and what a large impact it can have on generating physical activity. Alternatively called Pedestrian Sundays, Sunday Parkways, or Car-Free Days, a Ciclovia consists of opening up a long stretch of road to people for a few hours on Sunday morning. Police help crowds stop for red lights so cars can still cross at intersections. Mr. Penalosa showed examples from Bogota, Los Angeles, Chicago, and Guadalajara where tens of thousands of people came out, boosting the local economy and providing sometimes a week’s worth of physical activity for families.

Following the talk was some lively discussion about ideas and actions specific to Austin, with members of the Bicycle Advisory Council in attendance spurring the conversation along.

MISSION BikeTexas advances bicycle access, safety, and education. We encourage and promote bicycling, increased safety, and improved conditions. We unite and inspire people and provide a cohesive voice for people who ride bikes in … END_OF_DOCUMENT_TOKEN_TO_BE_REPLACED