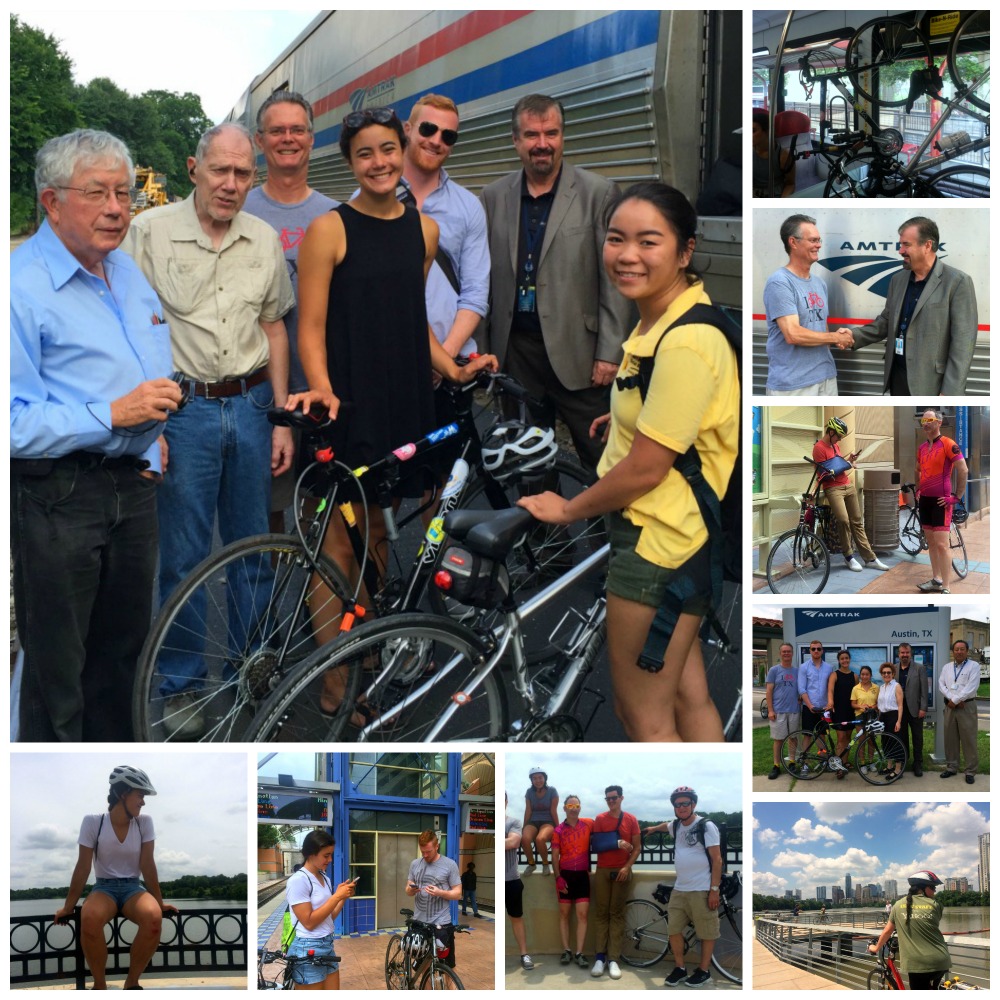 Elena Studier had a plan for her summer internship: using Amtrak’s expanded roll-on bike service, she would travel the US by bike and rail. No cross-country tour can be complete without a stop in the Lone Star State, and we were delighted to show off four of Texas’ cities during her quick weekend here: showcasing the great bike and train travel available in our home state, and letting folks know about Amtrak’s newly expanded service.

Elena’s Texas tour kicked off in San Antonio in the wee hours on July 11. Those joining Elena on the ride through the city met at Sunset Station, where riders had the opportunity to try out electric bikes (with one taker opting for an e-bike rather than his own for this ride). Along for the ride were representatives from the City of San Antonio and Mayor Taylor’s office, local advocates, and BikeTexas member Robert Rivard of the Rivard Report. Of course, no visit to San Antonio is complete without seeing the Missions and the Riverwalk, and that was our route, with plenty of other sights the city has to offer along the way.

Then it was on to Austin, with a ride around Lady Bird Lake and then through the entertainment district (taking advantage of the protected bike lanes downtown) en route to Plaza Saltillo station. Robert Borowski of Capital Metro joined us for a trip up the Red Line to grab some lunch and chat with Elena about the future of rail in Austin and the region.

The whirl of a tour continued on Saturday in Fort Worth, where BikeTexas Board Member Doug Black took over ride leader duties to show us around his city. We met Elena and Sean (of the National Association of Railroad Passengers) at the Fort Worth Intermodal Transportation Center and rode through Fort Worth’s downtown and along the Trinity Trail, including a stop at the Phyllis J. Tilley Bridge, and through the Magnolia Avenue Restaurant Row.

Our great weekend with Elena came to a close on Sunday in Dallas. We met BikeTexas member and determined ride leader Zac Ford at the Dallas Union Station (Amtrak). Zac didn’t let a broken arm stop him from leading Elena and the rest of us through the downtown district and on to the Katy Trail and the White Rock Lake Trail via DART.

Elena continues her journey through the U.S., and you can see the sights and read about her experiences on her blog.

MISSION BikeTexas advances bicycle access, safety, and education. We encourage and promote bicycling, increased safety, and improved conditions. We unite and inspire people and provide a cohesive voice for people who ride bikes in … END_OF_DOCUMENT_TOKEN_TO_BE_REPLACED