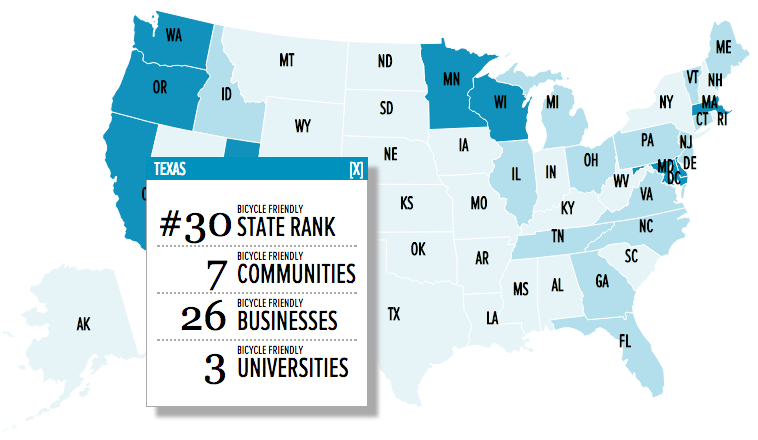 We’re so thrilled with today’s announcement from the League of American Bicyclists of the Fall 2015 Bicycle Friendly Communities— FOUR Texas cities are on the list, two for the first time, bringing the total of Texas BFCs to seven!

Congratulations to Brownsville and Plano, both entering the list for the first time at the Bronze level. We’re so proud of all the hard work both cities have put into reaching this milestone. We know firsthand that elected officials, city departments, and local citizen advocates all played vital roles in putting Brownsville on the map as the Bicycling Capital of the Rio Grande Valley, and Plano has made great strides in improving conditions for bicyclists, confirming its place as one of the best cities to live and work in North Texas.

The Woodlands Township has renewed its Bronze level status for another four years. Even retaining the same status requires that the city keep working hard and never stopping in its quest to make a community a great place to ride a bike.

And finally, a huge congratulations to Austin for reaching GOLD level! After many years at Silver, the city stepped up its game to make sure that this year, a Texas city would earn gold. Only 24 cities around the country are current Gold level cities. Austin is also the only capital city on the Gold list (since the only other capital city, Madison, moved up to Platinum).

In addition to these four cities, Houston, San Antonio, and Richardson are also Bronze level Bicycle Friendly cities in Texas. These seven cities are home to over five million Texans, almost 20% of the state’s population. Texas is also home to 26 bicycle friendly businesses, and as of this month, three bicycle friendly univiersities. The Bicycle Friendly America Program has been one of our best levers as bicycling advocates to improve conditions for bicyclists of all ages, as cities, businesses, and univerisities all see the rewards and challenges in meeting and exceeding the metrics required to be recognized by the League.

Congratulations again to Austin, Brownsville, Plano, and The Woodlands!

MISSION BikeTexas advances bicycle access, safety, and education. We encourage and promote bicycling, increased safety, and improved conditions. We unite and inspire people and provide a cohesive voice for people who ride bikes in … END_OF_DOCUMENT_TOKEN_TO_BE_REPLACED