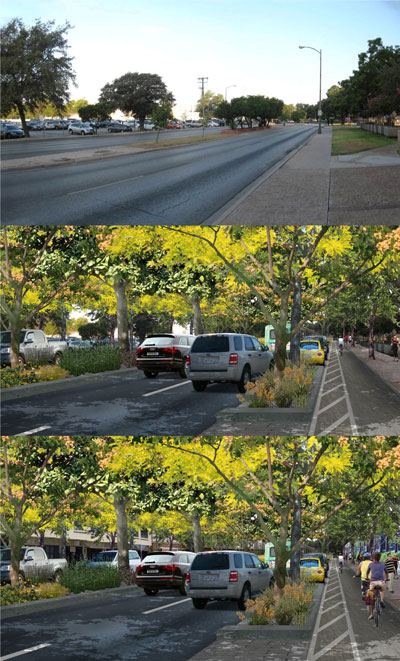 San Antonio held a Livability Summit on August 21, 2013, bringing together key players working to make San Antonio a vibrant, walkable, bikeable city. The day was organized into four panel discussions each with 4-5 speakers presenting different aspects of the San Antonio to come. Here are some brief highlights (and a couple lowlights) of the day, from the perspective of people who ride bikes.

The first panel discussion focused on a phrase recently coined by Mayor Castro: The Decade of Downtown. Daryl Byrd with SA2020 started the day off by presenting the vision for the city that came out of an extensive public involvement process – that of a compact city, with rich centers of multiuse development and a diverse multimodal transportation network. Andres Andujar next presented some compelling details of the new Hemisfair Park that will soon begin taking shape, including what would be the first in Texas – a plaza street where cars, pedestrians, and bikes would all mix at low speeds. Jeff Arndt, President/CEO of VIA, gave a presentation that included a lot of information about their Primo bus rapid transit (BRT) line and its future plans along with the upcoming streetcar project. Studies around the US and the world have shown how effective BRT can be at producing economic growth. VIA showed how their one current line is connecting the high employment centers of the Medical Center and Downtown with residential centers along the route. They talked about the new possibility that developers are exploring with increasing the amount if housing in the Medical Center.

The next panel focused on specific projects that are pushing boundaries of innovative development. Shannon Mattingly showed some very interesting work from a new master planned community in New Braunfels, highlighting development codes that will foster short block length and easy connections for biking and walking to parks, commercial centers, and neighboring streets in what could normally be a car-dominated tract of suburban housing. Mukul Malhotra gave a rousing talk about Complete Streets and the many ways innovative cities are achieving multi-modal development, including burying highways in Boston, or removing them entirely in Seoul, to achieve reduced congestion and increased quality of life. Malhotra is with MIG, Inc., the firm in charge of Complete Streets accommodation in the bond projects that will be remaking Market St, Cesar Chavez St and others downtown.

After lunch, Representatives from the development community showed examples of some of their newest projects that combined a walkable and bikeable approach to development with the latest in environmental sustainability along with social equity, embodied in such projects as the Cevallos Lofts, that includes space for a small grocery store. James Lifshutz, the developer behind the Blue Star Arts Complex and an upcoming revival of the Hot Wells Hotel near Mission San José expressed pessimism that San Antonio could ever be a place where you could live without a bike. David Adelman with Area Real Estate, the developer behind 1221 Broadway had a different opinion, citing all the housing along with offices and commercial space at Pearl and its proximity to downtown as evidence that a complete life could be already be had in town without needing an automobile, and that will only grow as a possibility in the future.

Building on this notion was John Dugan a senior planner in the City’s Planning and Community Development department, as part of the day’s final panel “Public Sector Insight.” Mr. Dugan discussed in practical terms what the vision of SA2020 laid out – a series of dense, walkable centers throughout the San Antonio region that are connected by transit. He talked about the need for redoing suburbia, and that really a suburban style of development is what defines the majority of San Antonio. Instead of creating a totally dense city, he said that the city would need to density several centers enough to be walkable or bikeable within those centers, then connect those centers with transit. He also stressed the need to have what every Chinese city has – a museum of planning – in order to have space to showcase a physical model of the city and its buildings.

Mike Frisbie, the director of the City’s Capital Improvements Management Services (CIMS) on the same panel gave a disappointing overview of his department’s attempts to accommodate cycling. CIMS oversees all the projects from the 2012 bond package as well as internal construction for the City of San Antonio. Many of the bond projects advertised bike lanes or other accommodation, some of which has since been removed as CIMS goes through its design-build process, including some of the first bike lanes in the city on Theo and Malone streets. Mr. Frisbie was lackadaisical about pushing forward any real attempt to increase cycling in San Antonio, instead stating that some cyclists would prefer to be in the road mixing with traffic, therefore no specific bike accommodation is acceptable in some projects, even though this is in direct conflict with both the City’s Complete Streets Policy and the language used to advertise these bond projects.

Overall, the day included a wide variety of people working to increase quality of life in San Antonio and its environs through infrastructure, planning and development. Although there was some time for questions, in general the audience was kept apart from panelists, and the day lacked interactivity that could have been helpful for building broader connections among all the stakeholders present.

You can see the full day’s agenda– and check out several of the presentations (downloadable)– here.

MISSION BikeTexas advances bicycle access, safety, and education. We encourage and promote bicycling, increased safety, and improved conditions. We unite and inspire people and provide a cohesive voice for people who ride bikes in … END_OF_DOCUMENT_TOKEN_TO_BE_REPLACED