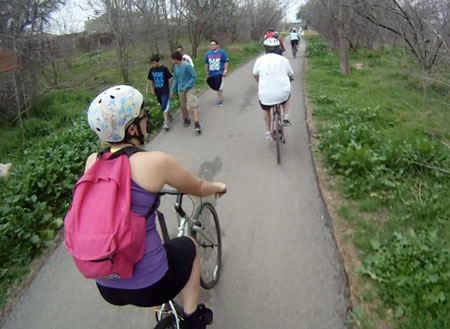 The Leon Creek Greenway North and the Medina River Greenway, both in San Antonio, have been newly designated as National Recreation Trails (NRT) by Secretary of the Interior Ken Salazar and National Park Service Director Jonathan B. Jarvis.

The San Antonio Parks and Recreation department reports that the Leon Creek Greenway is a 13-mile trail that connects to many neighboring parks. The Medina River Greenway is seven miles long over mostly easy terrain, but it does include some switchbacks for an extra challenge. Both of the newly-designated trails will soon have trail markers to note the achievement of being included in the national database.

Altogether, San Antonio now has 41 miles of greenway trails open to the public, with plans to add more. All greenways are free of charge and are open during daylight hours.

The Salado Creek Greenway trail, once completed, will likely be included in the National Recreational Trails Database as well.

Each year the NRT accepts nominations for trails to be listed in the national database. In addition to receiving trail markers, successful organizations also receive a certificate of designation and a letter of congratulations from Secretary Salazar. The NRT reports that 54 trails in 23 states were added to the national database on May 31, for a total of nearly 1400 miles of trails. The only other trail in Texas newly designated this year is the Tejano Walking Trails in Austin.

MISSION BikeTexas advances bicycle access, safety, and education. We encourage and promote bicycling, increased safety, and improved conditions. We unite and inspire people and provide a cohesive voice for people who ride bikes in … END_OF_DOCUMENT_TOKEN_TO_BE_REPLACED