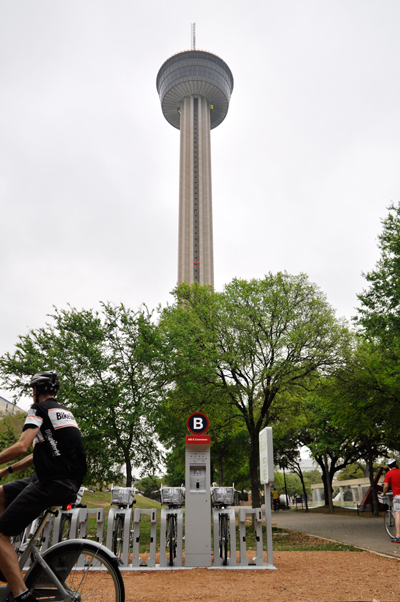 Dozens of people showed up at 7:30am on Saturday March 26, 2011 in downtown San Antonio for the launch of Texas’ first modern bike share program.

The event was an un-official launch and a chance to get volunteers to distribute the bikes at the 15 bike stations around downtown. BikeTexas staff were present to help and to highlight what a significant moment this was for all of Texas.

The B-Cycle system (seen also in Denver and Chicago), much like their competitors Public Bikeshare (seen in Washington, D.C., Minneapolis, Montreal, and London), entices users to replace short car trips downtown with a bike.

The easy-to-use system allows residents and visitors to purchase a membership using a credit card at any station around town. Memberships are $10 for 24 hours, or you can pay $25 for a week or $60 for a year at the website sanantonio.bycle.com.

As a member, you get free access to any bike for 30 minutes at a time. The farthest distance between any two stations is only about a 20 minute ride, so this allows you to take a bike from one station and deposit it securely at another close to your destination, then walk to where you need to go.

The bikes themselves are friendly for anyone. The seat adjusts to fit a broad range of heights with a quick-release lever, but has a mechanism so it can’t be stolen. Lights on front and back are powered by generators so they’re on all the time. The chain is completely encased so it won’t mess up your clothes. There’s a built in bell to let people know how much fun you’re having, and a basket that can carry a couple bags of groceries.

One group of tourists from Kansas arrived at Hemisfair Park just after the station there got its first bikes. They took out four bikes, and two hours later were still station-hopping to stay within the half-hour limit. “We’ve been coming to San Antonio for ten years,” they said, “and we’ve seen more of the city today than we ever have before.”

MISSION BikeTexas advances bicycle access, safety, and education. We encourage and promote bicycling, increased safety, and improved conditions. We unite and inspire people and provide a cohesive voice for people who ride bikes in … END_OF_DOCUMENT_TOKEN_TO_BE_REPLACED