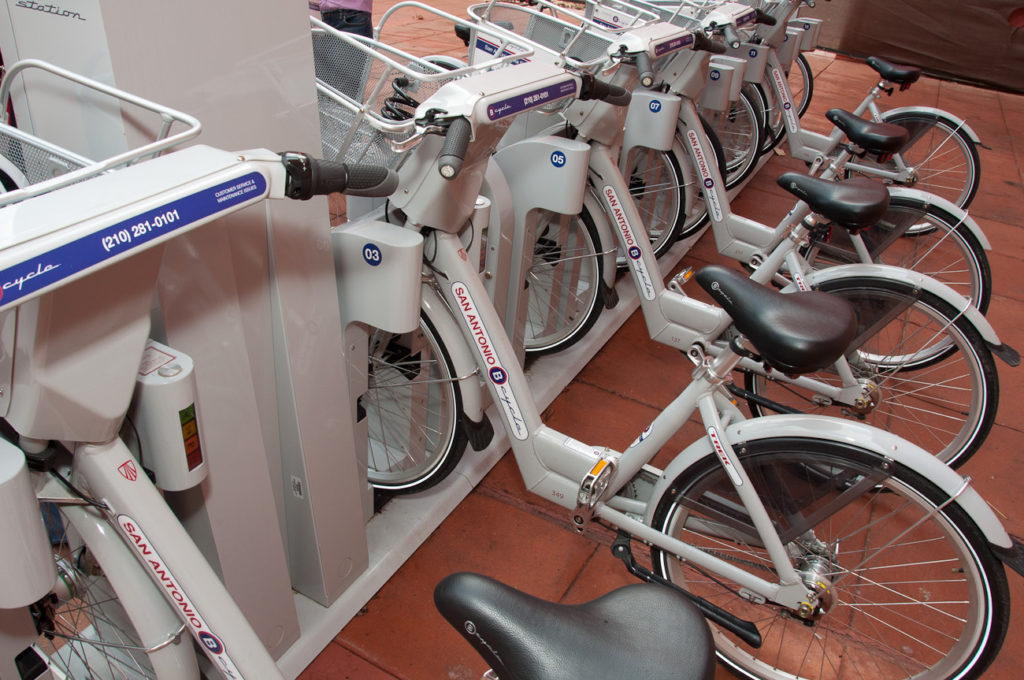 The City of San Antonio and San Antonio B-cycle are partnering with the National Park Service to expand the bike share system farther south of downtown to connect to the San Antonio Missions National Historical Park.

San Antonio B-cycle, the first bike share system in Texas, launched in March 2011 and has proven to be widely popular with locals and tourists alike; the Alamo City Beat reported this past March that San Antonio’s bike share is the second busiest B-Cycle system in the nation. The system currently has 23 stations, and this expansion will provide seven additional stations at or near the four missions, which are protected by the National Park Service (NPS). The stations will be spread over the Mission Reach portion of the river improvement project.

B-cycle users have been requesting this sort of expansion more than any other over the past year. The new bike share stations will enhance accessibility for visitors to the Park, since visitors will be able to ride from one mission to another by bicycle along a car-free trail, instead of having to drive between them. B-cycle use is free for the first 30 minutes with a membership or day pass; after that, users must check the bike back in or pay an additional fee. Until now, the nearest B-cycle station to the missions would have taken users outside that 30-minute window, making it impossible to visit the missions via B-cycle. With more stations on the trail, the missions will be more accessible from downtown and the surrounding community. Furthermore, reducing the need for more parking near the missions is a significant step toward enhancing the visitor experience as well as limiting the types of uses that could impair the missions’ natural and historical resources.

The City and County have also made street and park improvements in the eight-mile stretch between the Alamo in downtown San Antonio and Mission Espada, the southernmost mission. The Alamo, the only local mission not maintained by the NPS, attracts two and a half million visitors per year and is Texas’ most visited site. Through this improved connectivity, more locals and visitors will expand their range beyond downtown and will have greater accessibility to the surrounding community resources, parks, trails, and riverways.

The San Antonio Missions will be the third National Park site to have bike share stations, following quickly on the heels of Capital Bikeshare at the National Mall in Washington, D.C., and NiceRide MN at the Mississippi River National Recreation Area.

MISSION BikeTexas advances bicycle access, safety, and education. We encourage and promote bicycling, increased safety, and improved conditions. We unite and inspire people and provide a cohesive voice for people who ride bikes in … END_OF_DOCUMENT_TOKEN_TO_BE_REPLACED