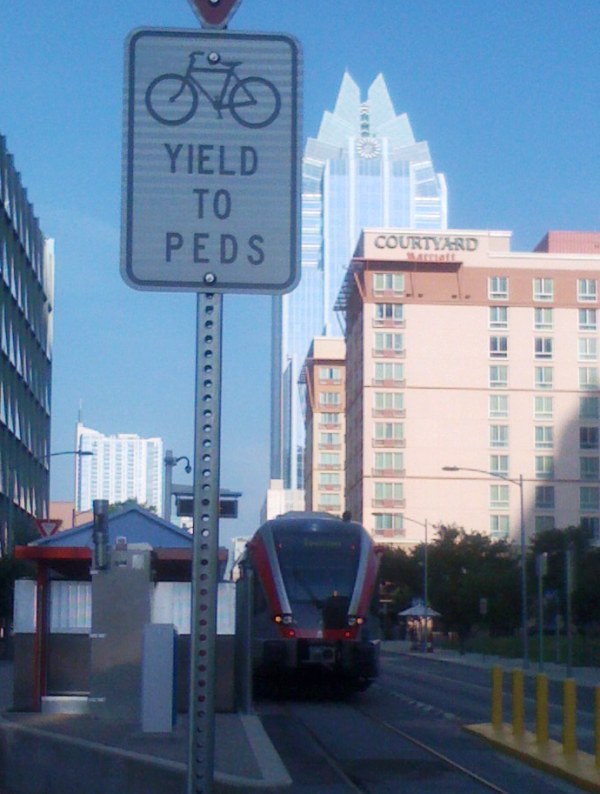 Austin has a new commuter rail system called the MetroRail Red Line. Since I live close to one of the stations, I decided to try to take the train to my internship at BikeTexas and see how it went. The first time I tried to take the train, I mistimed my arrival and ended up waiting some time before deciding that I would not be taking the train that day. Next time I made sure to arrive at the Crestview Station with plenty of time to spare.


I easily figured out the ticket dispenser (though I think if I’d been late that this process would have foiled me), boarded and sat down. I watched all kinds of people come up to share the experience with me: a mom with her young kids, a guy on a bike, an older gentleman and friendly policemen to keep us all in line. Every few minutes a pleasant voice told us how long before the next train came, and it arrived just as she said. We got on without having to swipe our cards or anything and had our choice of seats. The cyclist chose to sit right behind where he had hung his bike on therack.

The front part of the train is obviously designed for the commuting worker, with fold-out trays for your lap top and even seating areas for four. Further back is more like a typical train without the nice fold-out tray, but the giant windows give you a view of Austin usually unseen: people’s backyards, the side of the store away from the street, the covered-in-graffiti buildings that the city forgot about and even some nice glimpses of seemingly-untouched nature. All that for $2, and I arrived at my destination sooner than if I had driven my car (especially in traffic). The MetroRail, in combination with my bike and maybe a bus, can get me anywhere in Austin I need to be – on time and for a small cost compared to that of the gas and insurance required for a car.

MISSION BikeTexas advances bicycle access, safety, and education. We encourage and promote bicycling, increased safety, and improved conditions. We unite and inspire people and provide a cohesive voice for people who ride bikes in … END_OF_DOCUMENT_TOKEN_TO_BE_REPLACED