You are here: Home / BikeTexas BikeNews / BikeNews; Community / Promised El Paso Bike Lanes On Hold, Or Are They? 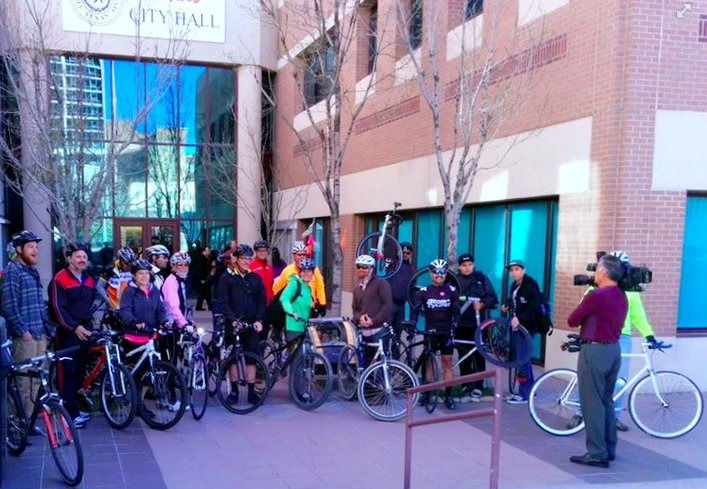 It’s hard being a bicycle advocate in El Paso when you’re not sure if you’re winning or losing the battle.

El Paso, TX – Just moments after the Transportation Planning Board (TPB) of the Metropolitan Planning Organization (MPO) voted on August 1 to reprogram $2 million in federal funding that had been slated for new bike lanes, we found ourselves wondering “where can we tell people to ride, when they already think there aren’t safe places to ride now?” El Paso has a long history of underfunding (or worse, defunding) bicycle infrastructure in favor of other projects, and our fear was that we had witnessed El Paso’s huge new commitment to bicycle infrastructure vanish before our eyes. In El Paso, when bike projects get delayed, they usually don’t come back.

In March of this year, El Paso’s City Council narrowly voted to move forward with new bike infrastructure, after about 50 members of Velo Paso and the local cycling community rode to City Council to ask the council to preserve that funding. One of our council members had proposed that the city should suspend future bike lane construction after receiving complaints that cyclists weren’t using the bike lanes. We pointed out that the existing lanes were often substandard, poorly designed, full of debris, didn’t feel safe, were not connected, and often were not where riders needed bike lanes. Despite our concerns, we were told it was in our interest to wait for a better design process to be implemented, rather than for the city to continue to build bad bike lanes. (We were later told the proposal was meant to “punish” those who designed bad bike lanes, yet the real result would have been to deny bicycle riders the safe places we have been asking for!)

We agreed that a better planning process was needed, but making us wait wasn’t making us any safer, either. Fortunately, one of our friends on council agreed with us, and had already placed on the day’s agenda a motion to form a Bicycle Advisory Committee. After prolonged debate, mostly about the financial costs of the lanes (as opposed to the need for safe transportation options), the Council narrowly voted down the proposal to suspend bike lane construction. The Council also approved the new Bicycle Advisory Committee to help facilitate the creation of better bicycle infrastructure.

It was a good day for cycling in El Paso. Or so we thought: Almost five months later, the Bicycle Advisory Committee has yet to meet. Just five of nine positions have been filled, and the vote to NOT suspend bike lane construction has apparently had no real effect.

One of the challenges of building any sort of transportation infrastructure can be the deadlines. About the time we were expecting to hear about the new plans, we instead learned that the city had been unable to move the planning process along far enough to let the projects move forward. In other words, it appears as though someone sat on the bike lane projects (intentionally or unintentionally, we don’t know), and now as the fiscal year was coming to an end, the money couldn’t be spent because the city wasn’t ready. (Federal funds have a “use it or lose it” policy attached.)

We lost the funding, and we were fit to be tied. Until…

It turned out that someone, somewhere in the city had been working on bike/walk projects, so just a couple of weeks after we had been told the city wouldn’t be ready to spend the $2 million for bike lanes, we were amazed to hear they had four hike/bike projects ready to be put forward. On August 12, the council voted unanimously in favor of all of them.

You might recall that El Paso had some similar fun last year with our back-and-forth over the bike share program (on again, off again, on again, off… well, you get the picture). We finally got it approved, and yet we’re still waiting for that, too. It just seems that while the idea of bike friendly projects appeals to our local leaders, those charged with bringing them to fruition don’t always seem to get it. Or get that we need better infrastructure NOW. For too long El Paso has continued to build roads for cars, not people – leading many local drivers to believe anything that isn’t a car doesn’t belong on the road, and that “well, if they’re on the road in front of me, they’re just asking for it, right?…”

In addition to the four new projects, we are also happy to report that city will soon be developing a new Bicycle Master Plan and has just approved a Complete Streets policy that we hope will help prioritize pedestrian and bicycle friendly infrastructure. It’s hard to tell where our city leaders are headed sometimes, but we hope these new projects and policies mean the city will little by little connect the hike/bike network across our community. Additionally, we at Velo Paso have begun to gather key partners and reach out to the surrounding municipalities to promote bicycle friendly policies, and are beginning to plan our own vision for a connected Paso del Norte region.

It’s funny how one day we can despair for the future of our community, and the next we can find ourselves racing to the top – just like each rider can have a bad days and good days. But each morning we get back on and get out there, knowing that the next ride might just be our best yet, or it could be a suffer fest. Either way, with a little support from our friends, we know we can make it to the end.

About Velo Paso: Velo Paso is a group of avid cyclists and engaged citizens from across the Paso del Norte region who want to improve conditions for bicyclists and pedestrians in our community. For more information, please visit www.velopaso.org, www.facebook.com/velopaso, and www.twitter.com/velopaso. Photo courtesy of Scott White: Attendees at March’s City Council meeting in El Paso.

MISSION BikeTexas advances bicycle access, safety, and education. We encourage and promote bicycling, increased safety, and improved conditions. We unite and inspire people and provide a cohesive voice for people who ride bikes in … END_OF_DOCUMENT_TOKEN_TO_BE_REPLACED