You are here: Home / BikeTexas BikeNews / BikeNews; Community / Peaches and Paris in the Summer 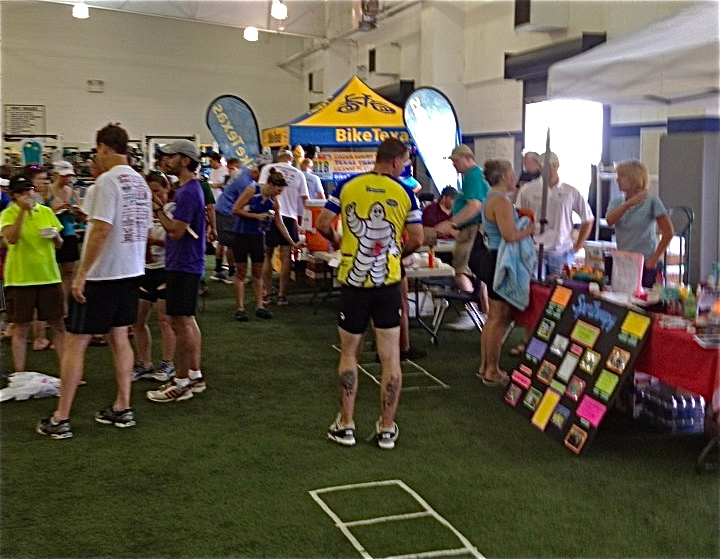 BikeTexas staff headed north for a few days to greet cyclists at two North Texas events and spread the word about the BikeTexas license plates.

The first stop was at the Peach Pedal on July 14 in Weatherford. Participants went home with about 100 BikeTexas license plate flyers, 75 “A to Z By Bike” books, and 100 bookmarks. During the ride, BikeTexas staff were able to help Brent Baker, the ride coordinator, locate an injured rider’s husband. Staff members also doctored one case of severe road rash and helped one lady on the verge of collapse with heat exhaustion. Overall, it was a successful day in that so many riders stopped to talk. Many Peach Pedelers loved the new BikeTexas jerseys, and some asked about having shorts or sleeveless jerseys in the future.

July 19 took BikeTexas to Paris, Texas that is, ready for the Tour de Paris roadshow. Paris, while off the beaten path, is a very welcome surprise in that it is covered in large beautiful trees, narrow streets and a very evident lack of heavy traffic, so staffers took some of their free time to admire the city’s scenery and beautiful old homes.

The booth was only just set up at the Love Convention center when interested volunteers and participants started to come by. Many people at the event were happy to hear about what each of our license plates support, as well as take home some of our “A to Z by Bike” and “Let’s Bike There” coloring books. The turnout in Paris was great; in addition to 850 riders, there were 600 volunteers on hand to make sure the day went well.

BikeTexas staff were delighted to meet Earl Erickson, one of the organizers of the group that is working to get the North Texas Recreational Trail completed.  He is a passionate volunteer who was a cyclist until being hit from behind while cycling near Baytown, TX over 10 years ago. Even though he lost a leg and almost his life in that crash, he’s back on the bike. Earl rode part of the Tour de Paris this year with a modified hand cycle.

MISSION BikeTexas advances bicycle access, safety, and education. We encourage and promote bicycling, increased safety, and improved conditions. We unite and inspire people and provide a cohesive voice for people who ride bikes in … END_OF_DOCUMENT_TOKEN_TO_BE_REPLACED