You are here: Home / BikeTexas BikeNews / BikeNews; Community / News By Bike: Links for You to Read (Mar 6) 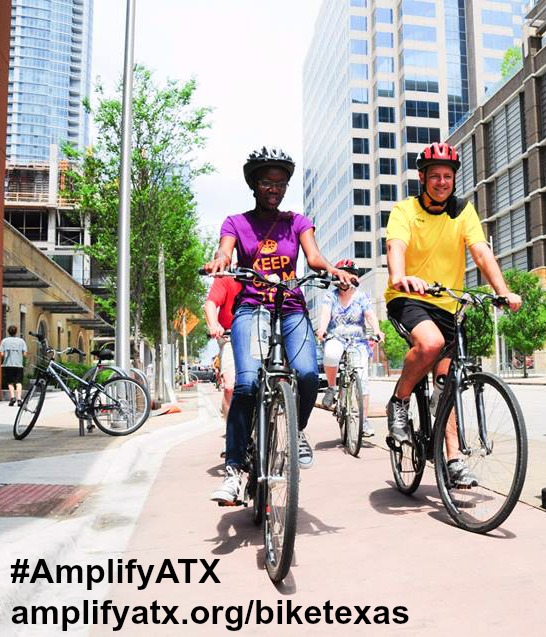 It’s Amplify Austin day! Support bicycle education in Texas, for everyone from our elected officials down to the tiniest new Texas riders. Donate here.

Cyclists in Suits is coming soon! Register, sign up for a bus to Austin, and request (or offer!) a homestay all in one convenient registration page.

Headed to Austin for South by Southwest? Don’t want to travel with your bike? We’ve got you covered.

An awesome delegation of Texans who ride bikes is headed to D.C. next week for the National Bike Summit. Stay tuned for our daily roundup of news while they’re away!

San Angelo is off to a good start in the HEB Community Challenge.

Fort Worth is hard at work building its next great street for all users.

A look at the difficulties in walking or biking to Dallas’ Arboretum.

Also in Dallas: the effect the Trinity Toll Road could have on the (currently fantastic) Continental Pedestrian Bridge.

One Aussie’s (excellent) take on Houston’s Safe Passing enforcement (other Texas cities do this, too!).

Check out the City of Dallas’ how-to guide for bike parking installation.

Brownsville’s next CycloBia is next weekend. Don’t miss it!

Waxahachie is getting some pushback against its bicycle plan.

San Antonio residents have a chance to offer feedback (and demand bicycle infrastructure) on Loop 1604.

Citizen-installed wayfinding signs are catching on all over.

Stop us if you’ve heard this one: a recent study found that urban design in Chinese cities affects citizens’ levels of physical activity.

Forbes considers the “safety in numbers” phenomenon for people who ride bikes.

New York is experiencing some pushback against Vision Zero’s crackdown on dangerous driving.

More trouble in London: the mayor suggests people on bikes wave their arms like an orchestra conductor to make sure they’re seen at traffic lights.

Photo: Sine Die (the legislature’s term for adjourning at the end of the session) Bipartisan Bike Ride in 2013, riding along a new protected bike lane on 3rd Street in downtown Austin. These legislative bike rides are valuable for showing elected officials, their familes, and their staffers not only how much fun it is to ride a bike, but also the needs of people who ride bikes so they have a clearer picture of why we ask what we do during the legislative session.

MISSION BikeTexas advances bicycle access, safety, and education. We encourage and promote bicycling, increased safety, and improved conditions. We unite and inspire people and provide a cohesive voice for people who ride bikes in … END_OF_DOCUMENT_TOKEN_TO_BE_REPLACED