You are here: Home / BikeTexas BikeNews / BikeNews; Community / New TxDOT Bike/Ped Coordinator is On the Job 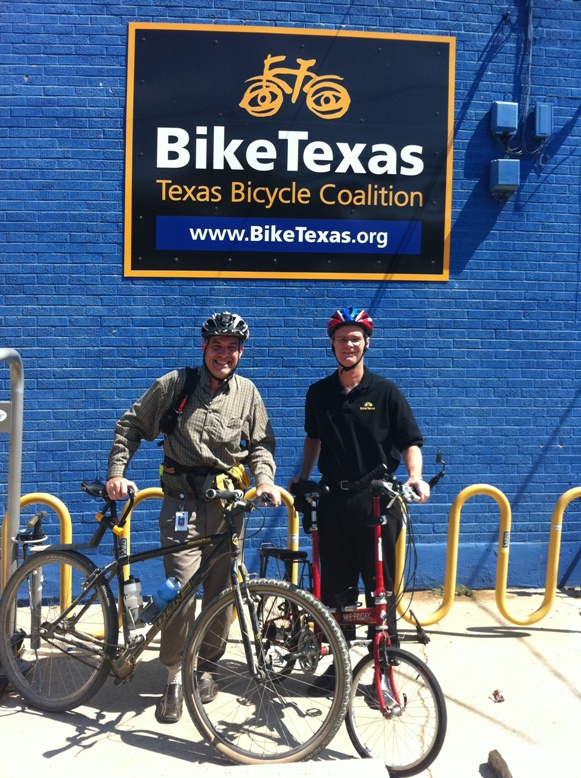 Though we were sad to say goodbye to retiring TxDOT bicycle and pedestrian coordinator Paul Douglas, we couldn’t have asked for a better person to take his place: Professional Engineer and daily bike commuter Charles Riou!  He began his tenure as bike/ped coordinator on September 1, 2011.

Charles has 25 years experience in transportation engineering at TxDOT with the San Antonio District, Traffic Operations Division and Design Division.  He has been a licensed professional engineer for over 18 years.  In the Traffic Operations and Design Divisions, he has worked on a wide variety of transportation projects including roadway, pedestrian, bikeway and bike lane, traffic signal, signing, ITS and inter-modal transportation projects.  He had field experience with two internships with the San Antonio District in project inspection and traffic data collection. He earned his bachelor’s degree in Civil Engineering from the University of Texas at San Antonio in 1986.

Charles has enjoyed bicycling since he was a kid.  He commutes daily to work by bicycle and enjoys cycling as transportation in Austin.  He also enjoys mountain biking and is an active member of the Austin Ridge Riders Mountain Bike Club where he is a board member, trail steward and trail designer/builder.  He is also active in supporting Austin’s parks through years of participation in various volunteer efforts including National Public Lands Day, National Trails Day and Austin Parks Foundation’s It’s My Park Day.

MISSION BikeTexas advances bicycle access, safety, and education. We encourage and promote bicycling, increased safety, and improved conditions. We unite and inspire people and provide a cohesive voice for people who ride bikes in … END_OF_DOCUMENT_TOKEN_TO_BE_REPLACED