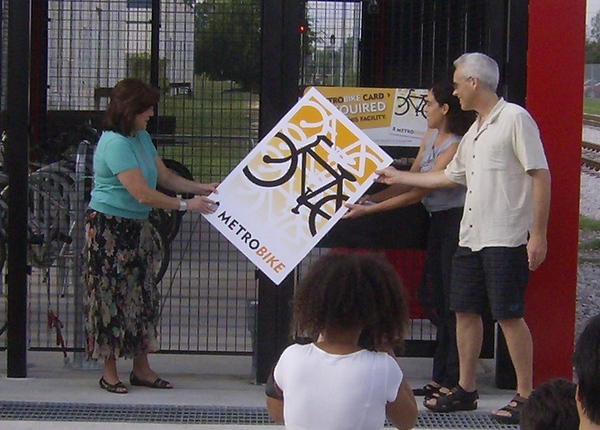 August 24 was a day for cycling-related grand openings in Austin.

Many commuters choose to combine cycling and MetroRail to get to work. Unfortunately, a common complaint from regular rail riders is that there are too many bikes on the trains and it’s hard to get around. CapMetro’s new MetroBike Shelter, which has been operational since August 6, is designed to help with that.

“As the sign behind me says, we love bicycles and cyclists,” Linda Watson, CapMetro CEO, said at the grand opening. “When we’ve surveyed cyclists, they’ve consistently asked for safe, secure places to store their bikes.” With the new shelter, accessible only by a key card given to paying users, cyclists will be able to lock up their bikes at the train station instead of taking them on board, thus making more room for other passengers.

BikeTexas is excited to see this development in MetroRail. When CapMetro first sought funding for passenger rail a few years ago, BikeTexas partnered with them to secure not only the funds for commuter rail, but also a place for cyclists in the new rail system. CapMetro agreed to, and has delivered, state-of-the-art accommodations for cyclists on trains, integration of train stations into the existing bicycle network, and state-of-the-art bicycle storage at train stations. BikeTexas is happy to continue to partner with CapMetro to meet the transit needs of cyclists in Austin. 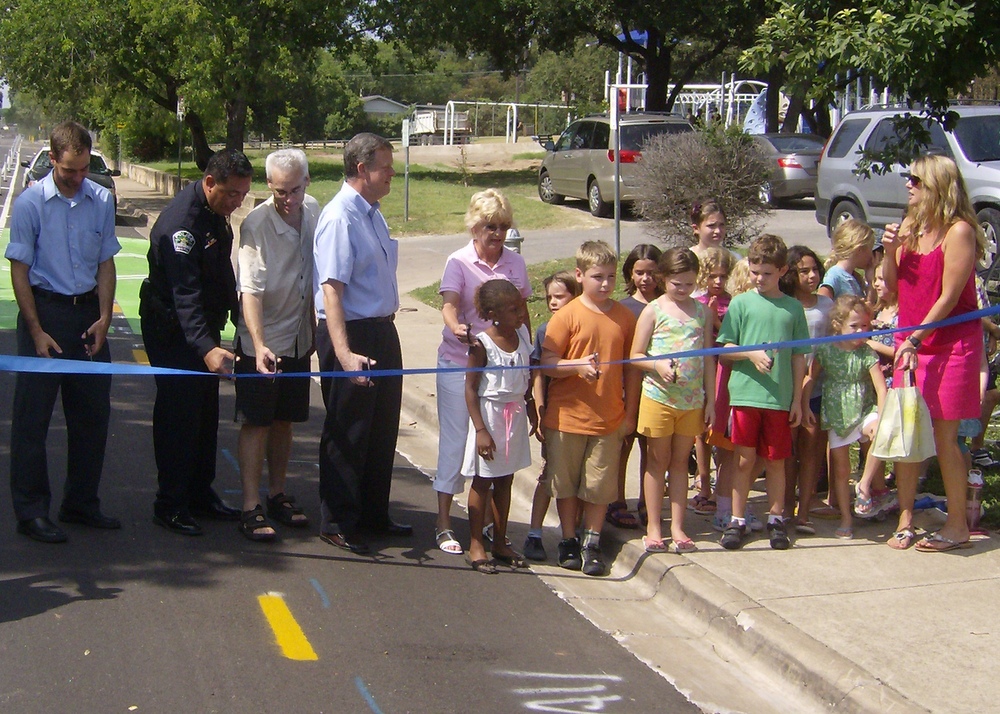 Many of the MetroBike attendees had to hurry away, including BikeTexas staff, to get to the day’s second grand opening: the new cycletracks on Bluebonnet Lane. The cycletracks run past Zilker Elementary School, and the school put in new crosswalks and bike racks in anticipation of more students riding to school this fall. Many members of the neighborhood, including Zilker Elementary students and parents, were in attendance for the press conference and ribbon cutting, and some parents remarked that they look forward to bringing their students to school by bike next week instead of in a car.

After the ribbon cutting, attendees hopped onto their bikes for a first ride on the new cycletrack.

MISSION BikeTexas advances bicycle access, safety, and education. We encourage and promote bicycling, increased safety, and improved conditions. We unite and inspire people and provide a cohesive voice for people who ride bikes in … END_OF_DOCUMENT_TOKEN_TO_BE_REPLACED