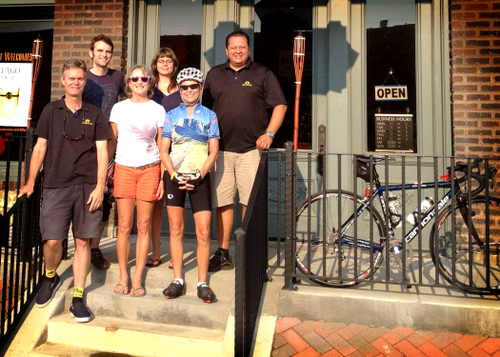 I first met Iris when she called me several years ago and inquired about getting “Share the Road” signs posted on rural roads in her county. We worked together to develop a strategy which she successfully implemented. She shared her experience in an article for the BikeTexas newsletter.

The taste of victory was sweet and Iris was ready to do more. The Safe Passing bill had been introduced in the Texas House of Representatives and the Texas Senate. Iris secured a letter of support from the Palo Pinto County Commissioners that made a strong positive impression on many rural legislators. She also came to Austin so we could meet with her State Rep. Jim Keffer and State Senator Craig Estes. She was very persuasive and won both legislators over to support the bill. Representative Keffer even joined the bill as a co-author!

The joy, courage and leadership exhibited by Iris was very appealing. Iris was recruited to join the BikeTexas Board of Directors where she has served the last two years. She has a been a tireless volunteer and champion for Texas cyclists of all types and ages, not just her fellow racers. Iris believed in giving back and wanted to see more racers engaged in bicycle advocacy and making conditions safer for the current and next generation.

She loved the bicycle trail in Mineral Wells and the protected bikeways that are catching on around the world, but she could not resist the beautiful, open Texas roads. Iris believed the roads exist for all users and we should exercise our rights as Americans to use them. She had been harassed and threatened while cycling by aggressive drivers many times over the years but she would not be intimidated.

Iris knew she was a safe and skilled bicycle rider and did not take unnecessary chances. She also said, “If I die while riding my bike then I will go out doing what I love.” Iris knew that the more bicyclists there are in a community, the safer it is for all of them. Unfortunately for all of us, Iris Stagner, age 54, died about fifty years too soon.

MISSION BikeTexas advances bicycle access, safety, and education. We encourage and promote bicycling, increased safety, and improved conditions. We unite and inspire people and provide a cohesive voice for people who ride bikes in … END_OF_DOCUMENT_TOKEN_TO_BE_REPLACED