You are here: Home / BikeTexas BikeNews / BikeNews; Community / Houston’s Washington Avenue Transformed to a Better Block for a Day 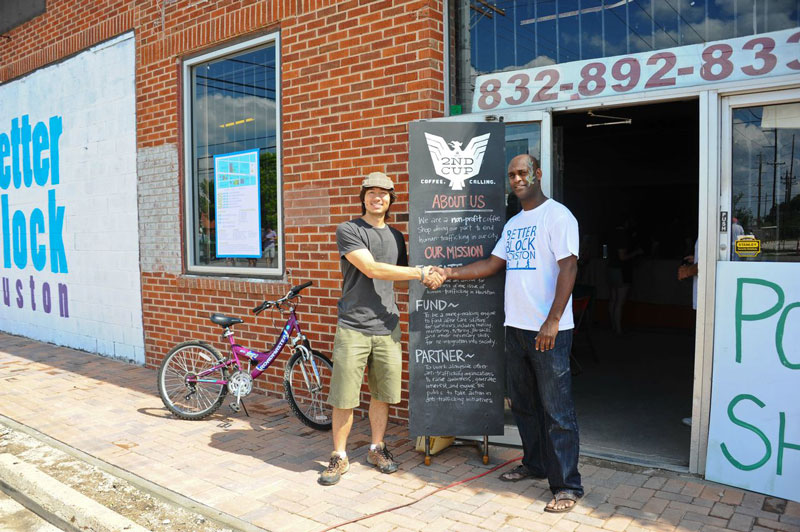 On May 12, 2012, Better Houston presented the city’s first Better Block event on historic Washington Avenue, near Houston’s central business district. An outdoor café, food trucks, local businesses, and live music all came together in two blocks of Washington Avenue to demonstrate what the street could be like if businesses moved into the vacant storefronts and the space were reclaimed for people instead of just cars.

The event was featured in the Houston Inner Looper here and here. Elizabeth Brooks, Planning and Urban Design Project Manager at Better Houston, said “Forty percent of Houstonians don’t drive because they are too old or too young or they can’t drive or don’t have a car, or rely on public transportation because they choose to.” She went on to talk about Baby Boomers retiring to “walkable livable neighborhoods,” and added, “I think the designers and the City need to work together to respond to the appropriate policies that allow for really good urbanism to be implemented here inside the Loop.”

A 2nd Cup, one of the vendors who took over a vacant storefront for the day, posted on Better Block Houston’s Facebook page, “We had a great time on Saturday at Better Block Houston turning a derelict building into a cool coffee shop.” One commenter responded, “Now you guys have to move in!”

Better Block’s mission is to provide a one-day glimpse at what a Complete Street could be like, including the positive impact on the surrounding neighborhood. Better Block originated in Oak Cliff in Dallas, and has gone nationwide.

MISSION BikeTexas advances bicycle access, safety, and education. We encourage and promote bicycling, increased safety, and improved conditions. We unite and inspire people and provide a cohesive voice for people who ride bikes in … END_OF_DOCUMENT_TOKEN_TO_BE_REPLACED