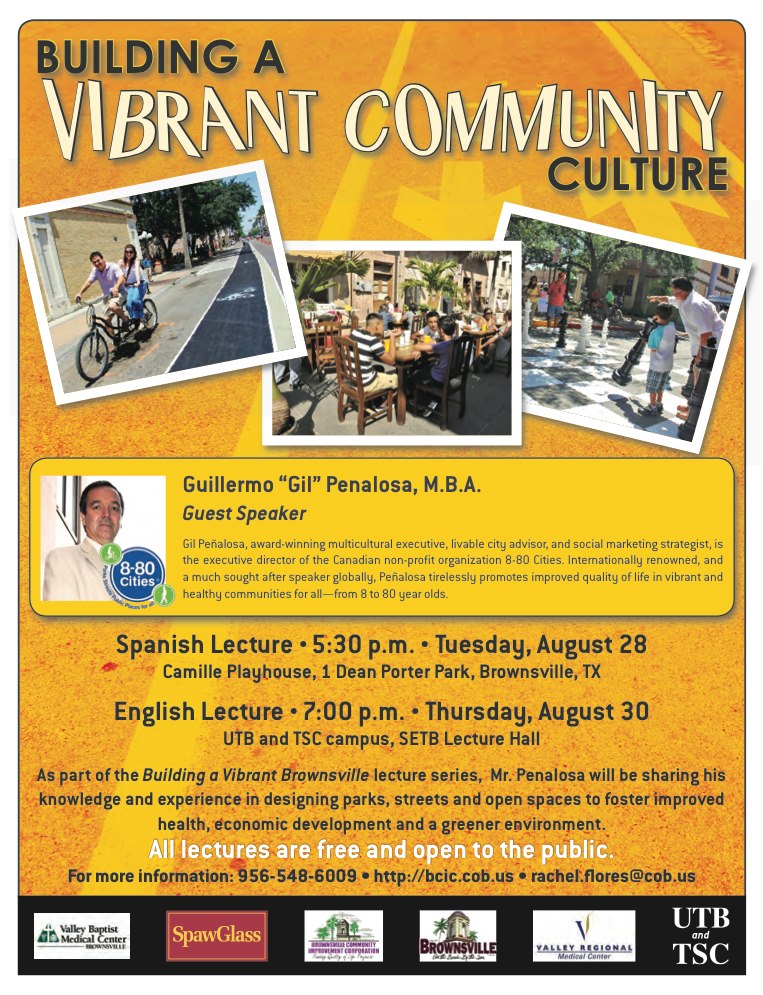 Gil Peñalosa, executive director of the Canadian non‐profit 8‐80 Cities and internationally renowned city advisor and active public spaces advocate, will speak to the Brownsville community August 28 and 30 as part of the Building a Vibrant Brownsville lecture series. Mr. Penalosa will share his knowledge and experience in designing parks, streets, and open spaces to foster improved health, economic development, and a greener environment.

As the former Parks and Recreation Commissioner for the City of Bogotá, Colombia, Mr. Peñalosa successfully led the development of over 200 parks and the city’s popular ciclovías— a weekly Sunday event where streets are closed for the exclusive use of pedestrians and cyclists. The Bogotá ciclovías attract over a million users each week, and the idea has spread all over the world: parts of Europe, South America, New Zealand and North America all have had ciclovía events (including El Paso, San Antonio, Fort Worth, Austin, and Dallas).

As director of 8‐80 Cities, Mr. Peñalosa helps cities understand and design the infrastructure, open spaces, and programming needed to better integrate driving, cycling and walking for people ages 8‐80, and in a manner that fosters community interaction. “Brownsville is a city where the majority of the population is either very young or retirement age. We cannot continue building under the assumption that everybody has access to a car or is very fit and can easily move around. If we do, then we are ignoring a very large segment of our population, and they deserve better,” said Commissioner Rose Gowen, M.D.

Mr. Peñalosa, the third speaker of the Building a Vibrant Brownsville series, will give a special presentation for the Spanish‐speaking community on August 28 at the Camille Playhouse at 5:30 p.m. His keynote address (English) is scheduled for August 30 at the Science Engineering and Technology Building on the UTB and TSC campus at 7:00 p.m. Both lectures are free and open to the general public.

MISSION BikeTexas advances bicycle access, safety, and education. We encourage and promote bicycling, increased safety, and improved conditions. We unite and inspire people and provide a cohesive voice for people who ride bikes in … END_OF_DOCUMENT_TOKEN_TO_BE_REPLACED