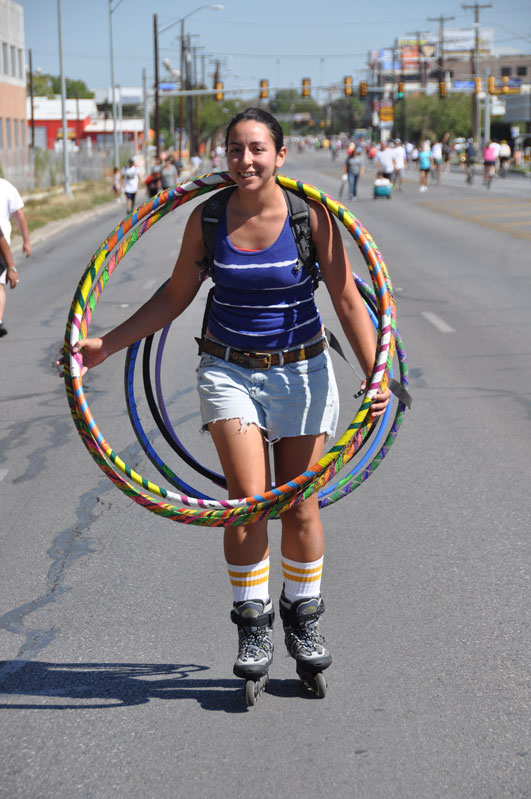 Katherine Velasquez with the City of San Antonio Metropolitan Health District discussed the city’s first ciclovia, where a city temporarily opens busy streets so people in the community can go out and play in them. It was a huge success, with a turnout of 15,000 people.  Cities as diverse as Los Angeles, New York, Mexico City, and Bogota, Colombia have instituted these vibrant community events.

San Antonio had received a $15.6 million grant from the federal stimulus plan to reduce and prevent obesity, and applied a small portion of those monies to get citizens outside to bike, run, and play. The first event was held on October 2, 2011, and the next will be on March 4, 2012. Designed for sustainability, they also partnered with the YMCA of Greater San Antonio to take on future Síclovía events once the grant cycle is over.

The ultimate goals were to promote active and alternative transportation and engage families and the entire community. “We wanted to promote physical activity and healthy lifestyles,” said Ms. Velasquez. They also hoped to provide access and exposure to a variety of physical activities without the negative connotations people often associate with the word “exercise.”

Ms. Velasquez explained that the event was very carefully organized, with a steering committee, route selection, and the proper approvals. They had water stations, first aid, bicycle rental and repair, healthy food vendors, porta-potties, and a large group of volunteers to keep everything running smoothly. The next event will even have water stations for pets. In addition to good planning, the events can accommodate spontaneous activity, too. “It’s very organized. We plan, but a lot of the things that happen, people do themselves,” Ms. Velasquez explained. Some participants arrived with hula hoops and sidewalk chalk to add to the fun. 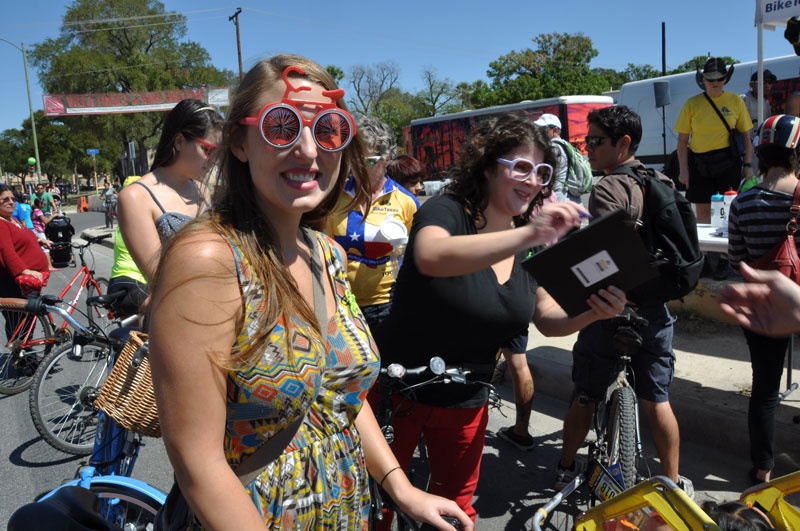 A unique feature of the San Antonio events are “reclovias,” pre-arranged physical activity classes and stations along the route that engage participants in things like tai chi, yoga, zumba, basketball, rock walls, and obstacle courses. People on their way along the ciclovia route could stop and try out new activities at their leisure.

The event was a success, with word of mouth advertising being the driving force behind attracting 15,000 participants. Many were more physically active than the average San Anotonian, but twenty percent did come from targeted ZIP codes where public health is especially at risk, citing spending time with family as the primary motivator in getting them out and moving on a beautiful Sunday afternoon. The city hopes the event continues on a regular basis, using urban streets and attracting a wide range of participants. “We want to close a street where we feel like we’re getting away with something.”

MISSION BikeTexas advances bicycle access, safety, and education. We encourage and promote bicycling, increased safety, and improved conditions. We unite and inspire people and provide a cohesive voice for people who ride bikes in … END_OF_DOCUMENT_TOKEN_TO_BE_REPLACED