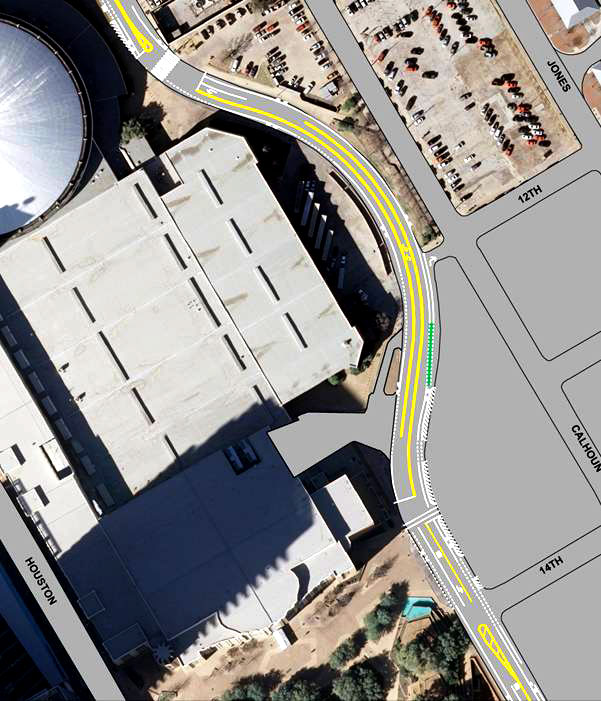 A bike lane is green in Fort Worth for the first time! Commerce Street, heavy with bicycles and buses, has gone green at a point of potential conflict. Julia McCleeary with the City of Fort Worth says, “The green paint helps bus operators be aware of the high volume of cyclist traffic along the route!” More green lanes are coming to Fort Worth later this month, Julia says.

Mayor Betsy Price is temporarily unable to ride with the group at her Tour de Fort Worth Community Bike Rides due to a cycling accident that left her with a broken collarbone. The rides will continue as planned, and Mayor Price says via her Mayor’s Message, “I’ll be cheering you on until I get back in the saddle.” Mayor Price is using her accident as an opportunity to highlight the importance of wearing a helmet; her old helmet is cracked after she landed on her head. She says, “it looks like it’s been through a NASCAR race.”

This summer, police officers in Fort Worth will be watching for kids wearing bike helmets — everyone under 18 is required to wear a helmet while cycling, per city ordinance. Kids without helmets will be given a helmet on the spot and educated about the law. Kids spotted wearing helmets will receive coupons for ice cream. The free helmets were donated through the Hard Hats for Little Heads program.

The City of Fort Worth is starting a new bicycle club for city employees, their families, and anyone who wants to ride along. Check out their website to see how you can join!

Plans are in the works for Fort Worth to have its own 100-mile ride next summer as a warmup event to Wichita Falls’ Hotter’N Hell. If the event goes according to current plans, it will begin downtown. The ride will raise money for the JPS Health Network residency program.

MISSION BikeTexas advances bicycle access, safety, and education. We encourage and promote bicycling, increased safety, and improved conditions. We unite and inspire people and provide a cohesive voice for people who ride bikes in … END_OF_DOCUMENT_TOKEN_TO_BE_REPLACED