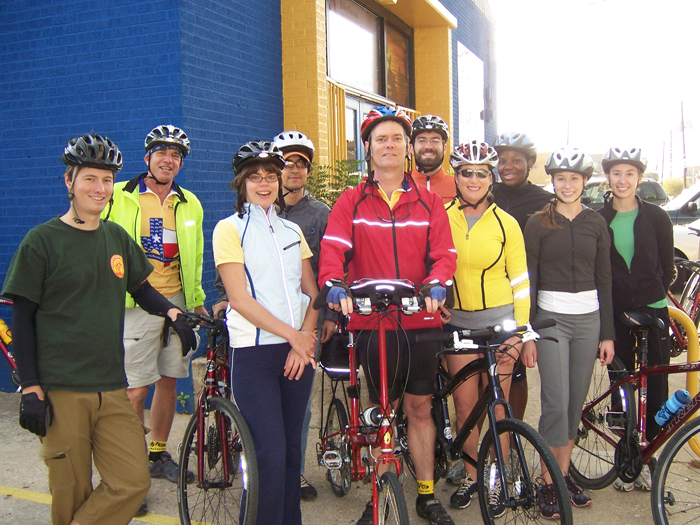 Before dawn on Tuesday, March 31, a hardy band of Capitol staffers and interns gathered at the BikeTexas office to go on a pre-work wellness ride. Organized by Senator Eddie Lucio, Jr.’s office and with bikes and ride leaders provided by BikeTexas, our goal was to ease the staffers into what was, for some of them, their first time on a bike in years.

The group, including Senator Rodney Ellis (D-Houston), downed coffee and chatted while being fitted for bikes and helmets, then we set off. The route was an easy 8 miles around East Austin, looping down by the lake and under IH-35 to the Mexican American Cultural Center, where Senator Ellis received a call and had to ride immediately to the Capitol for a vote. The rest of the group cycled back to the office and took a group photo before the staffers had to rush off to work at the Capitol.

The ride was a fun way to get this great group of desk-bound staffers active and reconnected with bike riding, and we hope to have more before the end of the legislative session.

MISSION BikeTexas advances bicycle access, safety, and education. We encourage and promote bicycling, increased safety, and improved conditions. We unite and inspire people and provide a cohesive voice for people who ride bikes in … END_OF_DOCUMENT_TOKEN_TO_BE_REPLACED