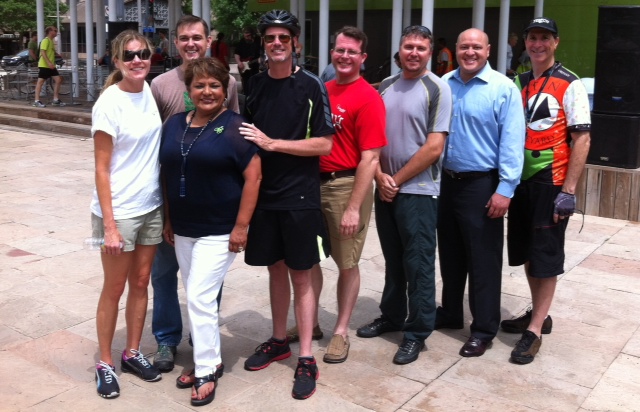 Dallas took another step forward in its bike plan this month by opening Centralink, a new network of sharrows in downtown that connects the Katy Trail, the Santa Fe Trail, and many neighborhoods.

On June 1, the city [debuted] a network of shared car/bike lanes downtown called the Centralink with a communal ride on the new paths called Ride-the-Link. Centralink adjoins the popular Katy Trail, a 3.5-mile concrete path along the west side of downtown, with the more recently built Santa Fe Trail, a 4.02-mile stretch through neighborhoods on Dallas’ east side.

“This is the first step in the Dallas bike plan, and it’s making a big connect through the downtown area,” said Jared White, project manager with Transportation Planning and Public Works for the city.

In addition to creating a network of bike lanes, White said Centralink also connects to Oak Cliff via the viaduct at Young Street and Market Street, as well as to the Trinity Strand Trail with shared lanes through Victory Park.

See a map of the new Centralink network here.

BikeTexas Board Member Annie Melton attended the opening and shared the above photo, taken by Bud Melton. Pictured left to right are:

MISSION BikeTexas advances bicycle access, safety, and education. We encourage and promote bicycling, increased safety, and improved conditions. We unite and inspire people and provide a cohesive voice for people who ride bikes in … END_OF_DOCUMENT_TOKEN_TO_BE_REPLACED