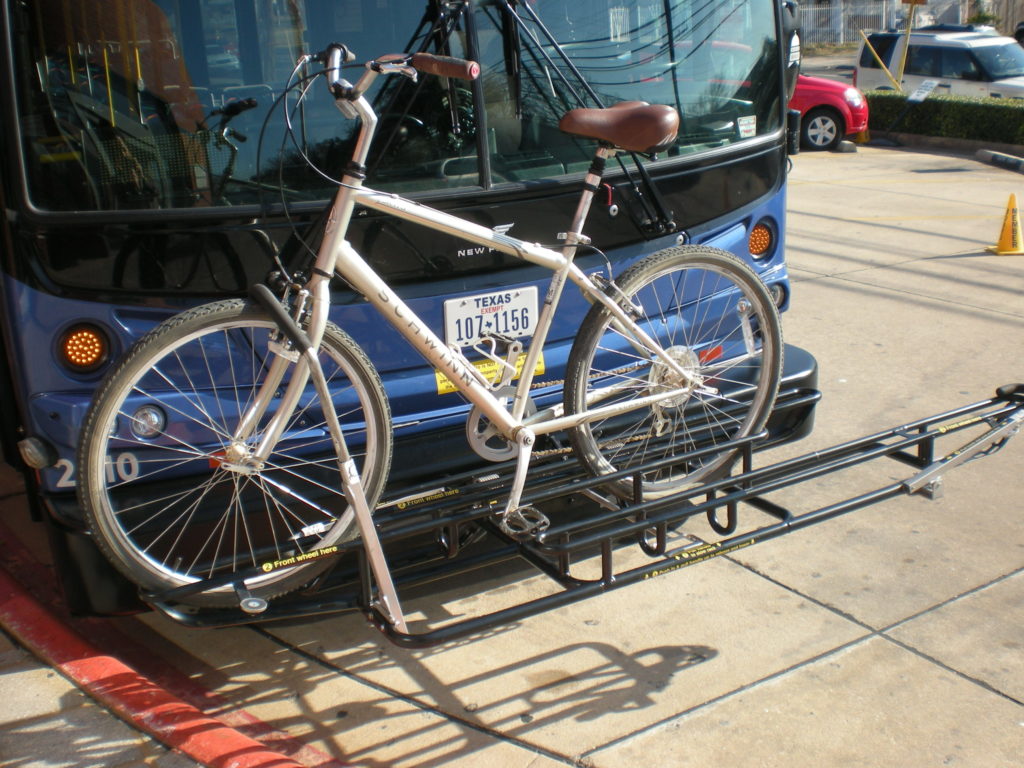 CapMetro in Austin will be adding three-place bike racks to ten of their buses later this summer in a pilot program to see if the larger racks are feasible. All buses in the CapMetro fleet are currently capable of carrying two bicycles, but CapMetro has been considering the larger racks for a while. Misty Whited with CapMetro says, “We haven’t been able to do this before because we had some issues with the bike racks blocking the headlights. We’ve talked to the manufacturer of our new buses and we’ll be trying out the new racks on the new buses this summer.”

Many cyclists in Austin have felt the frustration of waiting for a bus, only to be unable to board due to the bike rack already being full. While it’s encouraging that so many Austin residents are pursuing alternative transportaion, Misty says sometimes a full bike rack indicates a forgetful cyclist instead of increased usage. “Sometimes someone will forget a bike and the bus will have to drive around with it all day–we can’t just go back to the yard and drop it off,” she says.

Because one bus will often drive multiple routes in a single day, CapMetro doesn’t have specific routes planned for the new racks. However, Misty says that the buses are now able to track bike boardings to see which routes get the most bicycle usage, and perhaps in the future those routes can be targeted with the larger bike racks.

Most Texas cities with transit systems have accommodation for bicycles, usually with the two-place racks. The Bobcat Tram in San Marcos and The T in Fort Worth already have three-place bike racks on their buses. If you’ve never taken your bike on a bus, see CapMetro’s How to Bring Your Bike Guide or contact your local transit system with any questions.

Another change coming for Austin cyclists and transit users is the new bike shelter at Kramer Station. It will be launching next month with storage space for 30 bicycles. The new storage space will be secure, with access via swipe pass, although users will still need to lock up their bikes.

MISSION BikeTexas advances bicycle access, safety, and education. We encourage and promote bicycling, increased safety, and improved conditions. We unite and inspire people and provide a cohesive voice for people who ride bikes in … END_OF_DOCUMENT_TOKEN_TO_BE_REPLACED