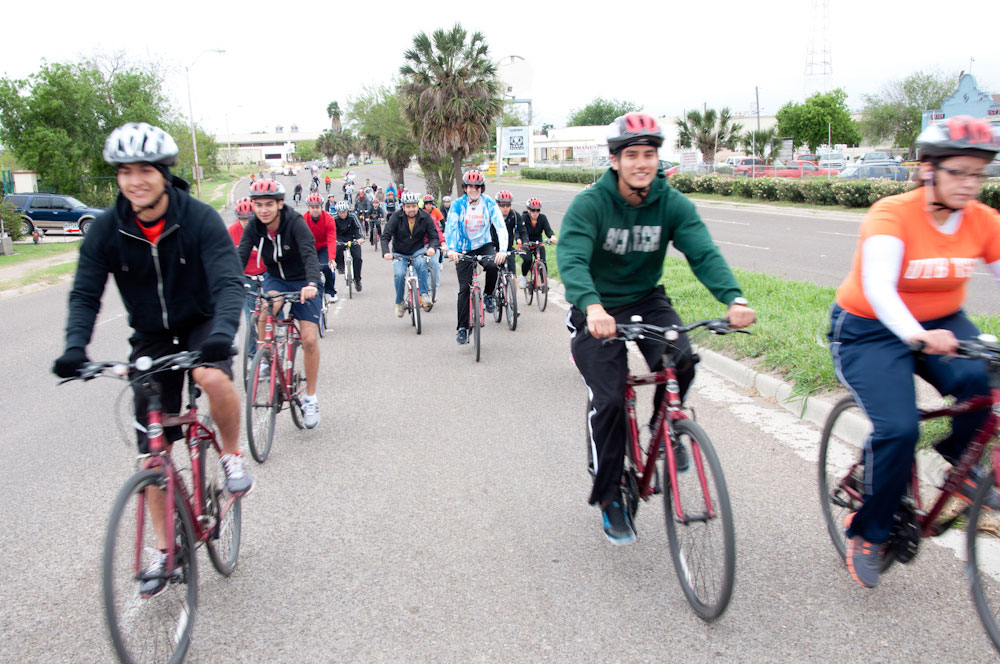 On a unusually cold spring morning, dozens of college students gathered with city leaders in downtown Brownsville for a bike ride hosted by BikeTexas, on Friday, March 9, 2012.

The ride circled downtown and showed off a nearby resaca, slated for dredging later this year to improve water quality. Dr. Gowen and others are leading the charge to get bike paths built along these beautiful urban waterways.

Next we stopped at a dead end – part of the route blocked by stopped freight train traffic – that in future years will be solved by projects that have come in part from Prof. Diaz’s students.

Cyclists next climbed one of the few hills in the city, facing a brutal headwind, up to the International Campus of UT Brownsville, housed in a former shopping mall. There an exhibit of some of the bike infrastructure envisioned by the architecture students was on display.

The route next wound through the main downtown campus before heading back to the park in front of the courthouse, which is also where the city’s great rail-trail starts before heading north.

MISSION BikeTexas advances bicycle access, safety, and education. We encourage and promote bicycling, increased safety, and improved conditions. We unite and inspire people and provide a cohesive voice for people who ride bikes in … END_OF_DOCUMENT_TOKEN_TO_BE_REPLACED