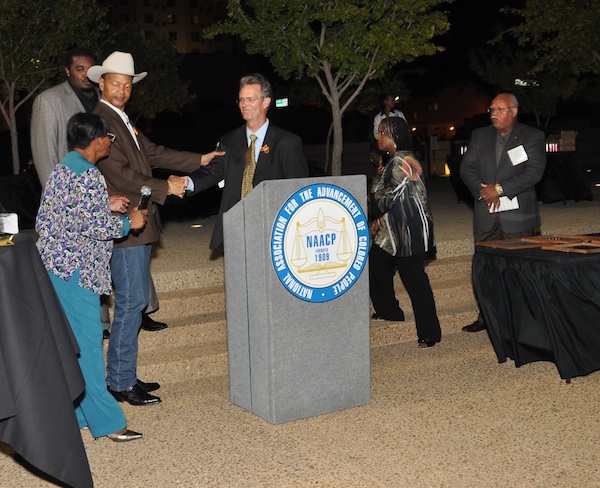 On October 7th, 2011, the Texas NAACP presented BikeTexas with Texas President Award at the 75th Annual Texas NAACP State Convention.  Gary Bledsoe, President of the Texas NAACP, handed the award to Robin Stallings, Executive Director of BikeTexas. Inscribed on the award are the words “For going above and beyond the call of duty to develop interest in biking and green benefits from biking in the African American Community”.

BikeTexas has a history of nurturing diversity, and bringing leaders into the bike culture.  Texas Legislators host bike rides at the annual National Conference of State Legislatures (NCSL) meetings around the country. With their fleet of bicycles in tow, Bike Texas conducts these rides for our Texas Legislative hosts.  Since 2005, Bike Texas has used opportunities like this to bring our Leaders and future leaders to cycling.

The following morning Bike Texas coordinated a bike ride for NAACP Leaders and attendees. Leaders from several NAACP chapters participated, including an enthusiastic group of collegiate chapter leaders.  NAACP President Gary Bledsoe and Fort Worth Mayor Betsy Price also participated in the ride.  The ride commenced shortly after dawn on a beautiful fall morning, touring Downtown Fort Worth and the Trinity Trail.  Brenda Chuleewah Bike Texas’ Teacher Training and Program manager was impressed with all of the women on the ride, saying the group was a broad mix of gender and age.

A special thanks goes out to the Fort Worth Bike Police who did a fantastic job of escorting our cyclists.  Bike Texas has also co-hosted rides with the NAACP in Kileen and Houston.

This is the first time in the history of the NAACP that a bike advocacy group received an award for helping to create more diversity in the cycling culture. Bike Texas is honored to be a part of this historic moment.

MISSION BikeTexas advances bicycle access, safety, and education. We encourage and promote bicycling, increased safety, and improved conditions. We unite and inspire people and provide a cohesive voice for people who ride bikes in … END_OF_DOCUMENT_TOKEN_TO_BE_REPLACED