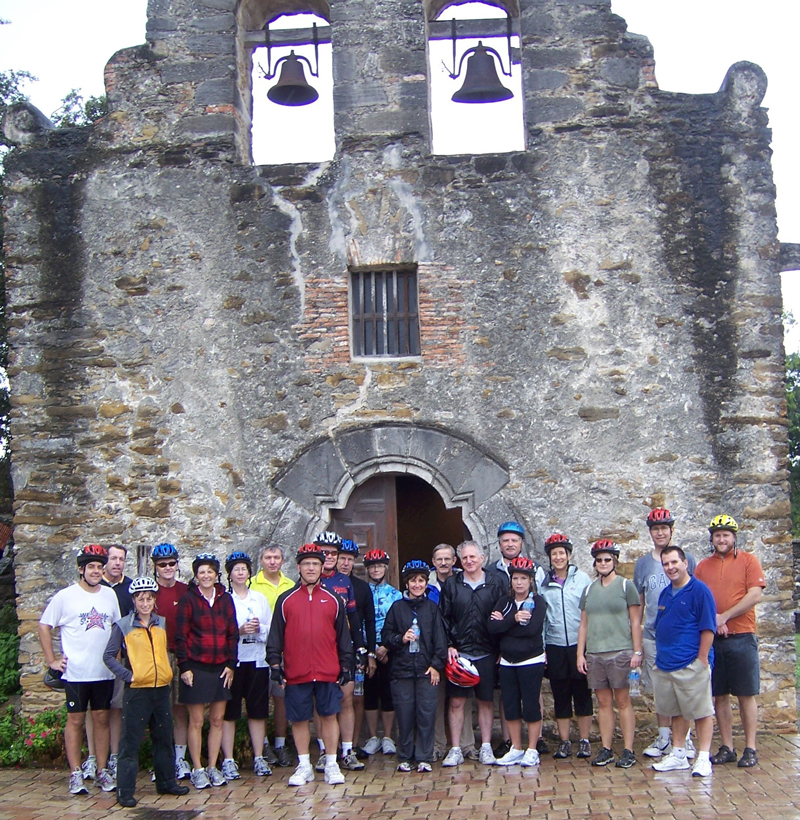 On Thursday, September 24th 2009, BikeTexas and Circa staff hosted 20 guests on an eleven-mile bike tour of the five missions along the popular San Antonio Mission Trail. Physicians and other medical professionals attending the Scoliosis Research Society Annual Meeting in San Antonio shook off the periodic rain as they toured the historic missions on bikes from BikeTexas’s fleet of 50 Trek hybrids. BikeTexas occasionally works with Circa staff (Austin and San Antonio offices) to host bike tours for visitors to Texas.

The ride started at the Alamo and covered Missions Conception, San Jose, San Juan and Espada from downtown to just outside the IH-610 South Loop. The four southmost missions are managed by the National Park Service (NPS). Every mission and mission setting is unique.

Hike and bike paths laid down in the 1990’s are being augmented by ongoing trail construction with the goal of a complete hike and bike route in the future. In 2005, BikeTexas worked with U.S. Congressional Representatives including Representative Henry Cuellar to bring a $3 million earmark to San Antonio for improvements to the Mission Trail.

To view and print a map of the missions and missions trail route, go to the NPS website.

Special thanks to BikeTexas intern and Bicycle Sport Shop mechanic Eli Robinson, who joined BikeTexas staff on this trip.

MISSION BikeTexas advances bicycle access, safety, and education. We encourage and promote bicycling, increased safety, and improved conditions. We unite and inspire people and provide a cohesive voice for people who ride bikes in … END_OF_DOCUMENT_TOKEN_TO_BE_REPLACED